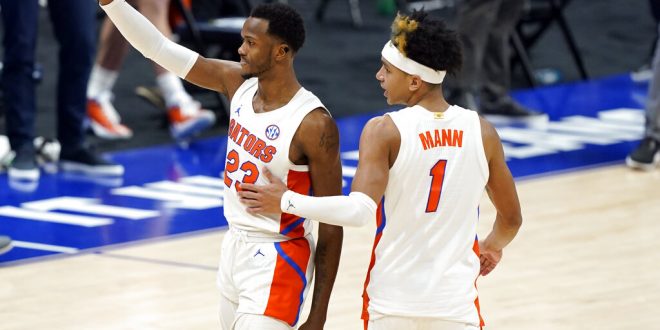 The Florida Gators and Tennessee Volunteers split the regular season series. The Gators will look to win the season series today in the quarterfinals of the SEC Tournament in Nashville.

Both Florida and Tennessee dominate a regular season game

The Gators won that game in Gainesville 75-49. Florida shot 49 percent from the field and 31 percent from behind the arc. The Gators will hope for similar numbers in today’s game.

The Vols used a huge second half to get the win at home 65-54 in the second meeting of the season. The Gators led by five at the half. However, Tennessee outscored Florida by 16 in the second 20 minutes.

Tre Mann was out for that game in Knoxville due to a migraine. Florida coach Mike White talked about his impact and what his team will have to do to win this time around.

For Tennessee, they earned a double bye and were able to watch all the action on TV.

Meanwhile, on Thursday afternoon the Gators took on Vanderbilt. Florida was in control much of the game until about midway through the second half when Vanderbilt took the lead. Gators led by as many as 12, but at the 8:43 mark in the second half, the Commodores took a 55-54 lead.

From there, the Gators were able to reclaim the lead and Tre Mann led the Gators down the stretch to close out Vandy for a 69-63 win.

It will be interesting to see who has the edge in this one. The rested Vols, or the Gators who played a day before.