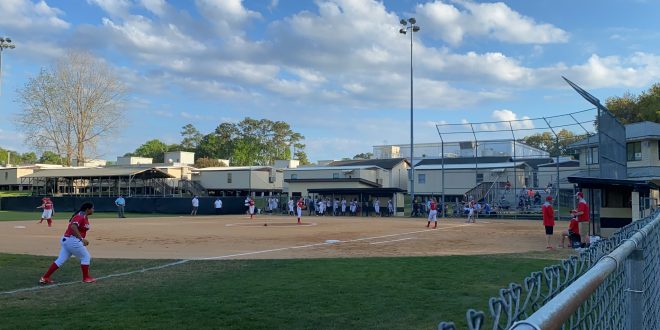 The Buchholz Bobcats softball team defeated the Bradford Tornadoes Tuesday night, 10-9, courtesy of a walk-off single in the bottom of the seventh inning.

Buchholz pitcher Bailey Quire pitched all seven innings, but struggled to find outs early. After the lead-off hitter was retired, Bradford strung together several hits to give the Tornadoes a quick 1-0 lead in the opening inning.

Trouble continued the following inning as the Tornadoes rallied with two outs. Hannah McFarland started the scoring with a two run double. Rylie Blankenship followed up with a double of her own, which scored another run to make it 4-0. Bradford was not done yet, as Allie Funderburke added a single just over the second baseman to plate another run.

Masey Padgett continued the Bradford hot streak with another double; however, Quire was able to end the inning, leaving two Bradford runners in scoring position. The Tornadoes held a 5-0 lead entering the bottom of the second.

Despite being down early, Buchholz felt that they were not out of the game . A pair of singles by Bailey Quire and Lauren Baltozer gave the Bobcats runners on first and second with no outs. Tione Akins came to the plate and snuck a ball through the gap to allow one Buchholz run to score.

An error by Bradford loaded the bases with just one out, and the Bobcats didn’t waste their opportunity. A two run single by Jadyn Goston once again cut the lead. This was followed up by another single courtesy of Jenjah Collins, plating one more Bobcat baserunner to make the score 5-4.

Two wild pitches added another two runs for the Bobcats, which put them into the lead, 6-5. The Bobcats took this lead into the third inning.

Wild second inning finds Buchholz back on top 6-5. Jadyn Goston brought in 2 runs with this RBI single for @BuchholzHigh pic.twitter.com/SuKaxdCJDl

After both sides traded high scoring innings, the Bobcats looked to keep their momentum as the game continued.

After Quire gave up the tying run in the top of the third, Buchholz quickly regained their lead. A single by Mary Elise Brady put the Bobcats back in front. Shortly after, Olivia McDaniel executed a perfect bunt to score another run, giving Buchholz an 8-6 lead.

Quire returned to the circle in the top of the fourth inning and had no trouble retiring the Tornadoes. The Bobcats took their 8-6 lead into the bottom of the inning.

Bradford replaced their starting pitcher, Maggie Olive, with Rylie Blankenship to start the bottom of the fourth inning. After getting the first batter out, Blankenship looked to retire Lindsey Orton, who stepped to the plate next. Orton, on the other hand, had different intentions, and blasted a long home run to left field to extend the Buchholz lead to 9-6.

After a scoreless fifth inning for both sides, the Tornadoes came to bat in the sixth and Takeira Bakken led off the inning and cranked her own home run to deep center field to instantly cut into the Buchholz lead.

A trifecta of bunt singles loaded the bases for the Tornadoes with just one out in the inning. Hannah McFarland slapped a single to shallow center field, which cut the lead to a single run and kept the bases loaded. A ground ball to Quire, who zipped the ball to the plate, was the second out of the inning, but more importantly saved a run. The score remained 9-8.

Allie Funderburke stepped to the plate in a crucial situation for the Tornadoes, with her team down by one and the bases loaded. Quire hoped to get out of the inning with the lead, but Funderburke had different intentions, sending a ball back up the middle to tie the game.

Quire snagged a sharp line drive to end the inning, but not before Bradford evened the score, 9-9.

Quire, who had pitched the previous six innings, came back out for the seventh inning.

The dangerous Takeira Bakken stepped to the plate hoping to give the Tornadoes some momentum. After working to a full count, Quire won the battle, as Bakken flew out to right field. Taylor Reddish was unable to find a better result, as she struck out for the second out of the inning. A single by Bradford’s Jaycea Edwards was wasted, as the following batter popped out to the pitcher to end the half inning.

Lindsey Orton, who homered earlier in the contest, led off the inning for Buchholz. She looked to win the game for the Bobcats, but was unable to get on base, recording the first out of the inning. Back to back walks to both Paige Tibbetts and Bailey Quire gave the Bobcats life. With runners on first and second, and just one out, Lauren Baltozer stepped to the plate and she was able to advance the runners to second and third on a fielder’s choice.

Tione Akins stepped to the plate next. After falling down in the count 0-2, Akins battled back to face a 3-2 pitch. Blankenship delivered the pitch, and Akins punched it between the shortstop and third baseman to walk-off the game for the Bobcats.