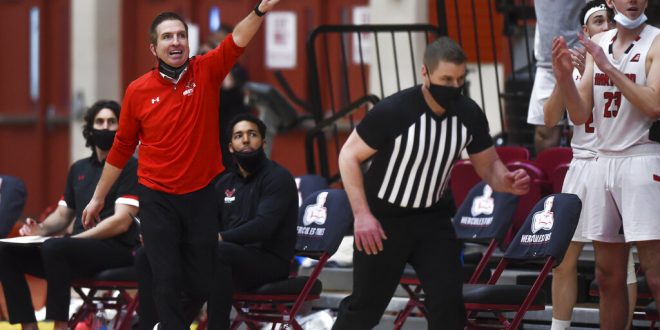 Hartford's head coach John Gallagher reacts on the sideline during an NCAA college basketball game against UMass-Lowell in the championship of the America East conference tournament Saturday, March 13, 2021, in Hartford, Conn. (Kassi Jackson/Hartford Courant via AP)

Gallagher has Hartford ready to make history in NCAA Tournament

Although Hartford is making its program’s first appearance in the Big Dance, but you wouldn’t know that from hearing Hartford head coach John Gallagher talk about their chances.

“If you want to win this game, you have to buy in,” coach Gallagher said.

Through his eleven seasons at the helm for the Hawks, he’s seen the hills and valleys of mid-major basketball as much as any coach.

Lots of roster turnover, losing seasons and conference tournament heartbreak are all too common in the world of no at large bids to the NCAA Tournament.

“It’s been a great experience just to get here,” Gallagher said. “At this level, it’s one bid. Everything is on the line.”

Now, finally breaking through with a tournament berth, his game plan for Friday’s matchup is quite simple. A former Steve Donahue assistant at Boston College, he borrowed one of his mentor’s principles in talking about the key to a big upset in March.

Simple enough, but it’s a common formula for underdogs everywhere who have the odds stacked against them. When you lack talent or athleticism in comparison to your opponent; discipline, hard work and fundamentals can go a long way. In this tournament, everyone knows good shooting, paired with a cold shooting night for your opponent and a little luck can put you over the top.

Hartford is going to need all of those things and more at 3:30 p.m. on Friday. They take the court against the Baylor Bears, second-overall seed and not your typical goliath this time of year.

New Blood Looking For A Title

One of the great stories of the year at the top of college basketball has really been a continuation from last season in Waco.

For a while, the Bears seemed to be poised to join Gonzaga as one of the undefeated teams heading into the postseason.

Their 84.4 points per game average is the third-best in the nation, and they might be the best three-point shooting college basketball team in the history of the game.

A 41.8 percent from behind the arc as a squad, Scott Drew has embraced small ball to a tee with six of his Bears shooting 39 percent or better from three.

Jared Butler is a Wooden Award finalist and would be the Big 12 Player of the Year in the absence of Cade Cunningham at Oklahoma State. Nonetheless, Baylor can go far based on their depth and insatiably hot hands.

Coach Gallagher understands. He knows this formula will have to work a little magic for his Hawks to pull off the 16-over-1 upset which only UMBC has done.

“Look, this is one of the two best teams in the tournament, it’s a daunting task.” Gallagher said. “We need Baylor to shoot bad; let’s put it on the table. They’ve got four guys that could go for 30.”

Banking on the best shooting team in the country to be cold in March can not be reliable alone. That’s why Gallagher stressed that the most important things for his America East champions will be to control what they can control: the little things.

“Your team has to believe in three or four things that you can’t deviate from: you can’t have live ball turnovers, you can’t shoot quick shots, you have to make them guard you,” Gallagher said.

Gallagher’s realism about his team, he admitted Hartford is not especially deep, pairs interestingly with his confidence about them. He’s said defense will be key to winning one game at a time, particularly staying out of foul trouble.

24-year-old guard Traci Carter is known by experts to be arguably the best defender in the whole tournament. Gallagher praised his veteran experience (he transferred from Marquette and La Salle) as a vehicle for his team’s winning ways.

For 16 seeds, their 1-139 record screams a forgetful legacy. But for teams like Hartford, and coaches like Gallagher, this is their opportunity to became legendary, forever remembered in the annals of March.

“We’re gonna go out there like bears and lions and try to attack them,” Gallagher said.

A lot would have to go right, but if it does, Hartford becomes a name people will never forget.

Caleb Wiegandt is a first-year Journalism student on the Sports and Media track in the University of Florida's College of Journalism and Communications. He has previous bylines in USA Today, Yahoo Finance, and The Louisville Courier-Journal before arriving at ESPN Gainesville. Caleb is a proud graduate of Holy Cross High School in southwest Louisville, Kentucky, where he was born and raised. You can reach Caleb at cwiegandt@ufl.edu.
@@CalebWiegandt
Previous Greenberg answers March Madness’ biggest questions
Next Michigan State Spartans Face UCLA Bruins with the Season on the Line