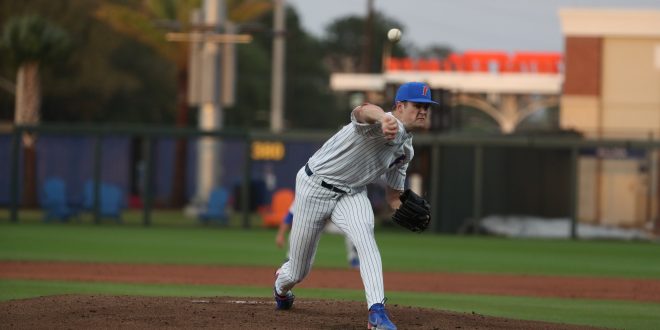 A pre-game shower over the Florida Ballpark foreshadowed all the hits raining down for the Gator baseball team on Thursday night. Florida opened SEC play in convincing fashion with a 13-4 win over Texas A&M. Ace Tommy Mace (4-0) took the mound, recording 11 strikeouts while setting the tone early for the Gators. In the unusual Thursday series opener, Florida snapped the Aggies 11 game win streak seemingly with ease.

” I was really pleased at the way we came out and played tonight,” Florida coach Kevin O’Sullivan said about the way his team bounced back from a loss at FSU Tuesday.  “It was a dramatic difference in energy and excitement in comparison to Tuesday’s road loss to Florida State. It was totally different today than it was Tuesday night, the players like to use the word swag, I don’t know another way to explain it.”

The fourth-year junior and one of the most dominant arms in the country established control early on in the ballgame. He fanned 11 while giving up just two earned runs in seven innings of work.

“Let’s face it, most guys who pitch in our league on Friday nights pitch in the big leagues,” O’Sullivan said.  “We played sound defense, there was that one inning where they scored three, Jacob (Young) slipped and obviously some slow rollers,” he said. “We kept our composure and did what we needed to do.”

Hitting was contagious in this game for the Gators. The team tallied a season high of 16 hits on the night. Each hitter in the Gator lineup was able to notch a hit in the books. Two freshman Gators holding down the bottom of the lineup kick started the offense in the bottom of the third. Catcher Mac Guscette started things off with a lead off single and second-baseman Colby Halter followed suit with a single to right.

” How about that, they had six hits and four runs combined,” O’Sullivan said.

The two fresh faces did not shy away from their first taste of conference pitching. Instead, they leaned in and found much success at the plate.

“We did a really good job tonight offensively,” O’Sullivan said. “Especially against a pitching staff when you look at the numbers, they are outstanding.”

Florida added multiple runs in the bottom of frames three, four and six.  The bottom two hitters in the order, Guscette and Halter, combined to go 6 for 9 with four runs scored and three RBI.  Centerfielder Jud Fabian added a three-run homer-run in the sixth. Halter also launched one of his own in the fourth. Designated hitter Nathan Hickey also put together a stellar night at the plate with two RBI’s and three hits in four at-bats.

The Gators will look to keep the momentum rolling in their second meeting with the Aggies on Friday. Florida will send righty Jack Leftwich to the mound with first pitch set for 6:30 p.m.