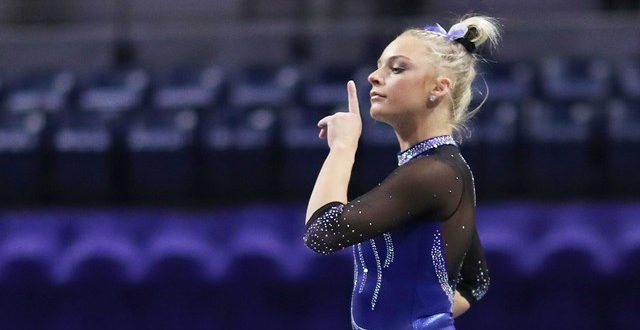 No.1 Gators Stumble on Bars, Place Third in SEC Championship

The No.1 Florida Gators gymnastics team have been dominating the rest of their conference all season; Saturday night, at the SEC Championship in Huntsville, Alabama, the team took them all on at once. Competing in the second session of the day, the Gators performed alongside Alabama, Arkansas and LSU in an effort to secure the team’s first SEC title since 2016. In their first postseason meet of the year, Florida came up short, placing third behind LSU and Alabama.

When the lineups were announced before the meet began, it was revealed that junior Trinity Thomas would be limited at the competition; the five-time All-American would only participate in the bars event. As the competition went on, her absence became more and more evident.

Because Florida entered the competition as the top-ranked team, the team opened on the vault. Starting off the championship for the team was senior Jazmyn Foberg, who scored a 9.850. Freshman Ellie Lazzari followed Foberg, earning a 9.825. Senior Megan Skaggs led the opening three gymnasts with a score of 9.875, but the following two juniors were who led the team. Junior Savannah Schoenherr earned the first 9.900 of the night for the Gators, and junior Nya Reed followed Schoenherr’s lead with a 9.900 of her own. Sophomore Payton Richards suffered a rare fall on her routine, dropping her score to a 9.300. After a solid (but not incredible) opening rotation, the team was .100 short of the leading team: Alabama.

In the second rotation, the Florida Gators entered a tailspin. Competing on the bars, an event the team ranks second in the nation at, the gymnasts were unable to maintain the consistency that has embodied their performances all season. Richards opened the lineup, earning a 9.825. Lazzari followed her with a 9.800, and Skaggs led the way for the Gators, scoring a 9.925. Schoenherr was the next gymnast up, and a fall in her landing dropped her score to 9.275.

Usually, a score like this is not as serious because the rest of the lineup can pick up the slack. However, senior Alyssa Baumann lost her balance on the bar in her routine, the very next one after Schoenherr, which caused her score to become a 9.325; this score would count for Florida. To close out the disastrous rotation, Thomas made her lone appearance in the championship and earned a 9.850. After two rotations, the Gators had dropped to last place among the teams competing in the second session.

In yet another dramatic turn, the Gators put together one of their best lineups of the season on the beam. Starting off the rotation was Richards, who once again slipped up in her routine; a fall off the beam sent her score to a 9.025. Despite the early miscue, Skaggs continued her role as the beacon of consistency, scoring a 9.900; this time, the rest of the team was ready to follow her lead.

Lazzari made a statement with her 9.950 score, Baumann redeemed herself with a 9.950 of her own, and junior Leah Clapper delivered yet another great score with a 9.925. Baumann, taking a leadership role as a senior, stood with every gymnast before their beam routine. Schoenherr rounded out the rotation with a 9.800, and the Gators appeared to look like their usual selves again. Despite the successful rotation, the team only climbed to third place, still trailing LSU and Alabama by over half a point.

In the final rotation, it would have taken a miracle for the Gators to pull out a victory; in a season that featured a last-rotation comeback against LSU, the team’s luck finally ran out. Clapper opened the floor routines with a score of 9.750, and Skaggs finished out her all-around night with a 9.800. In her final performance in a night she will want to forget, Richards scored an 8.850 on her floor routine. It was not all bad, though; Lazzari and Baumann both scored 9.900s, and Reed topped the Florida scores with a 9.925. These scores would not be enough to catch up, as Florida would place third in the SEC Championship.

Alabama walked away with the SEC title, earning a competition-topping 197.875 points; the Gators have surpassed this number twice this season. LSU placed second, falling a tenth short of matching the Tide at 197.775. Two Gators earned shares of event titles; Lazzari and Baumann’s 9.950s gave them shares of the beam title. Alabama sophomore Luisa Blanco would take home the all-around title, earning a share of the event title for every event except the floor.

After a heartbreaking loss in Huntsville, Florida will have no time to wallow in sorrow; the team will soon find out where they will be competing for regionals. If the team that has declared itself worthy of a championship wants a shot at one, it will need a better performance than the one on display tonight.

Carson Cashion is a first-year student at the University of Florida, and has a major in journalism- sports and media. Originally from the Orlando area, Cashion covers the UF Gymnastics Team, having formerly covered Oak Hall Sports.
Previous Gators Baseball sweeps Texas A&M in SEC Opening Weekend Series
Next Florida Gators Volleyball Loses to Kentucky in Final Home Match