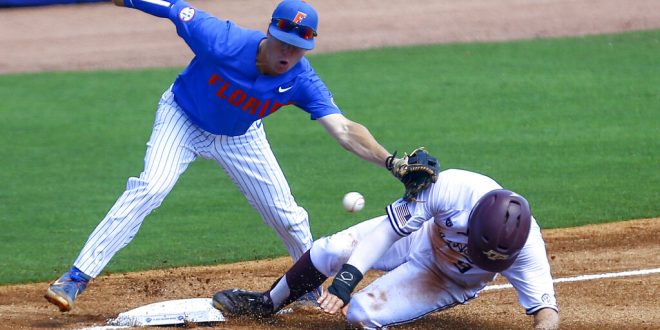 The No. 5 Florida Gators baseball team completed their SEC Opening Weekend sweep over the Texas A&M Aggies with an 8-4 victory.

Hunter Barco got the start for the Gators on the mound. Barco made quick work of the Aggies, holding them scoreless through the first five innings. Barco ended the day with nine strikeouts, nine hits and three runs through six innings pitched. The freshman is now 3-1 on the season.

Freshman pitcher Franco Aleman took the mound in the middle of a seventh-inning jam. Aleman contained the situation allowing just one run. The junior finished the game strong allowing two hits and string out five through his three innings pitched.

Florida got things rolling early in the bottom of the first. With two runners on base, Texas A&M’s Childress tried to throw out the runner at first but overshot the first baseman. This advanced Florida’s leadoff hitter, Jacob Young, home to put the Gators on the board 1-0.

Florida continued to see success in the bottom of the third. With Young and Nathan Hickey on base, the Gators third baseman Kirby McMullen smashed a home run over the left-field fence to put Florida up 4-0. McMullen finished the day with two hits and three RBIs.

After singles from Jud Fabian and Hickey, Jordan Butler singled to left field advancing Fabian in for the run. The Gators took a 5-0 lead in the bottom of the fifth.

The Aggies got their first run of the game in the top of the sixth inning. After a series of hits from the Aggies, Texas A&M got on the board with a single from Bryce Blaum, 5-1.

At the bottom of the sixth, Colby Halter furthered the Gators’ lead with an RBI double that advanced Sterlin Thompson home. The Gators entered took a 6-1 lead.

In the top of the seventh, Texas A&M loaded the bases on three consecutive singles, the Aggies’ DH Austin Bost drove in a run to put Texas A&M in the game 6-2.

The Gators retired Barco on the mound and brought in Aleman to get Florida out of the jam. Florida catcher Mac Gusette let a pitch slip past him adding on another Aggie run to cut the Gators lead 6-3.

Fabian kicked off the bottom of the seventh with a home run to right field that put Florida up 7-3. Gusette tacked on an RBI single to give Florida the 8-3 lead.

The Aggies got the last word in the top of the ninth with a fly out to right field that advanced the Aggies’ Ray Alejo in for the run.

However, the Aggies rally fell short as the Gators took an 8-4 Game 3 win.

The Gators take the road for their first away series on Friday, March 26. Florida will face SEC opponent South Carolina for a three-game series.