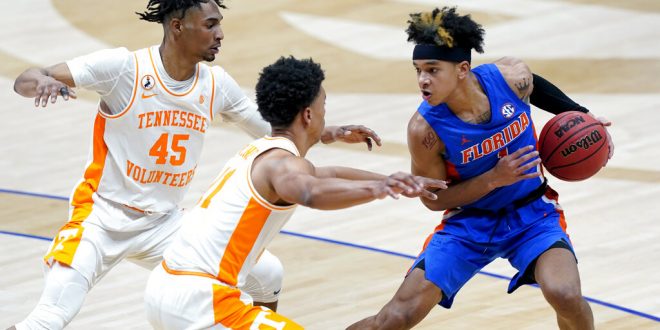 Florida's Tre Mann (1) is defended by Tennessee's Keon Johnson (45) and Jaden Springer (11) in the first half of an NCAA college basketball game in the Southeastern Conference Tournament Friday, March 12, 2021, in Nashville, Tenn. (AP Photo/Mark Humphrey)

The season for the Florida Gator Men’s Basketball team came to a close after being upset against Oral Roberts.

The Gators earned their way to the second round after defeating Virginia Tech, but fans were disappointed to see Florida fall to a 15-seed team. ORU is now the second 15-seed team in the tournaments history to advance to the sweet sixteen.

There were a few superstars that helped the Golden Eagles secure their spot to continue in the tournament. Oral Roberts forward Kevin Obanor scored 20 of his 28 points in the second half, while the nation’s scoring leader Max Abmas added 26 points to the board. The duo lead their team in points and even were 18 to 21 from the free throw line.

Despite ORU being the No. 2 free-throw shooting team in the nation, the Gators biggest downfall was the numerous turnovers and fouls. They turned over 20 plus times, allowing 23 points for the Eagles, while committing 19 fouls.

Florida Sophomore Guard Tre Mann scored 19 points in the Matchup, but missed the final three pointer that could’ve saved the Gators with only eight seconds on the clock. Florida guard Scottie Lewis attempted after but missed as well when time ran out.

Tre Mann admits that the turnovers and fouls were the major issues.

“That’s exactly what it was; turnovers and fouls,” he said. “You’re not going to beat a good team with 20 turnovers, and then making a lot of fouls against one of the best free-throw shooting teams in the country.

Florida Coach Mike White explains that the Gators were having issues keeping up with Abmas.

“We’re fouling as we’re trying to stay in front of Abrams, who’s like a track athlete out there,” White said. “It’s hard to stay in front of him. … They earned a lot of those fouls. The 20 turnovers? Yeah, this group, I just did a poor job of getting this team to embrace the level of valuing the basketball to compete at a high level.”

Oral Roberts is set to take on 3-seed Arkansas on Saturday.

Previous NCAA Women’s Basketball Tournament Continues: Freshman Out to Play
Next Another Day Of Dancing In The NCAA Men’s Tournament