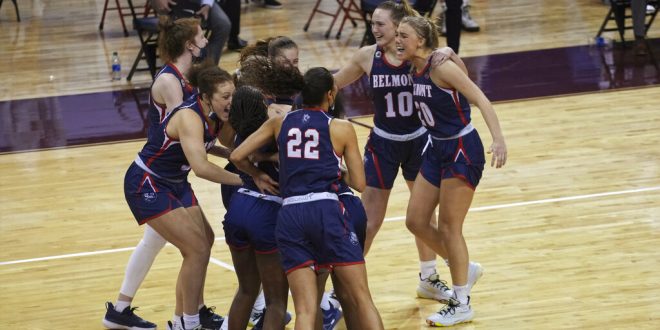 Belmont players celebrate a win over Gonzaga in a college basketball game in the first round of the NCAA women's tournament at the University Events Center in San Marcos, Texas, Monday, March 22, 2021. (AP Photo/Chuck Burton)

The round of 32 is ready to kick-off, but first, let’s recap days one and two of the 2021 Women’s NCAA Tournament.

Day one of the tournament went pretty much as expected, with the higher seeds going 16-0. Day two, however, was made for lovers of upsets, with three double-digit teams pulling off big upsets to advance.

No. 13 Wright State picked up their first win in the NCAA Tournament ever on Monday. And they did it against the only team to bring down No. 1 UConn this year. The Raiders upset No. 4 Arkansas, marking the first time since 2012 that a top-four seed has lost in the first round. Angel Baker led Wright State with 26 points and 12 rebounds, including a 3-pointer with 30 seconds left that secured them the win.

Another team marking its first tournament win was No. 12 Belmont. The Bruins overcame a number of setbacks to bring down No. 5 Gonzaga 64-59. Destinee Wells was the key to the game for Belmont, leading the team with 25 points, seven assists and two rebounds. She was the Ohio Valley Conference Freshman of the Year and became the first freshman named the OVC Tournament Most Valuable Player since 2011.

No. 11 BYU began the upset party on Monday, bringing down no. 6 Rutgers 69-66. After falling in the West Coast Conference tournament final on a last-second shot to Gonzaga, the Cougars were out to make sure this game did not have the same outcome. BYU was led by Paisley Harding, who scored 28 points.

A Should’ve Been Upset?

No. 15 Troy was on their way to making history. A 15 seed has never won a game in the NCAA Women’s Tournament. And a no-call kept it from happening again.

No. 2 Texas A&M led 82-80 with 4.5 seconds left. Kayla Wells’ pass bounced off the fingertips of teammate Destiny Pitts, who then chased after it, gained possession and dribbled into the backcourt. No over-and-back violation was called. Instead, Pitts was fouled and sunk two free throws to secure the Aggies’ win.

Troy absolutely HOSED by the refs with a chance to be the first 15-seed to ever upset a 2-seed in the #ncaaW Tournament.

Missed the obvious over and back call. Disgusting. pic.twitter.com/fNWwAAzsRc

Troy coach Chanda Rigby was upset with more than just that call though. With 54 seconds left, Tyasia Moore made a shot after contact, which would have tied the score at 79 and sent her to the line. However, Moore was called for a foul, her fifth.

UConn has proved time and time again that they have what it takes to succeed. But can they succeed without their starting guard Nika Muhl?

Muhl sprained her ankle in the Huskies’ first-round win over High Point. She is now listed as questionable for Tuesday’s second-round matchup against Syracuse. Muhl came down from a shot attempt on the foot of Chyna McMichel, twisting her right ankle in the second quarter. She was helped off the court and her ankle was immediately wrapped in ice.

UConn's Nika Muhl was helped off the court with an apparent ankle injury. #ncaaW pic.twitter.com/DKX9bKOPyF

Muhl suffered from a similar injury in the Big East tournament opener. However, she did return the next night. Muhl has started 14 of UConn’s 21 games, averaging 5.1 points and 2.9 assists.

500 career wins may be enough for some, but not for South Carolina head coach Dawn Staley. She is already looking ahead to 501. The No. 1 Gamecocks secured the win in the first round of the tournament, defeating No. 16 Mercer 79-53.

Staley is 328-102 in her 13 seasons at South Carolina, after going 172-80 in eight seasons at Temple. The Gamecocks are in their ninth consecutive NCAA tournament and were the national champs in 2017. They went 32-1 last season, spent the final 10 weeks at No. 1 and Staley was the AP coach of the year.

The second round of the tournament will tip-off today with No. 1 NC State taking on No. 8 South Florida at 3 p.m. The second round will span two days and will narrow the field from 32 teams to 16.