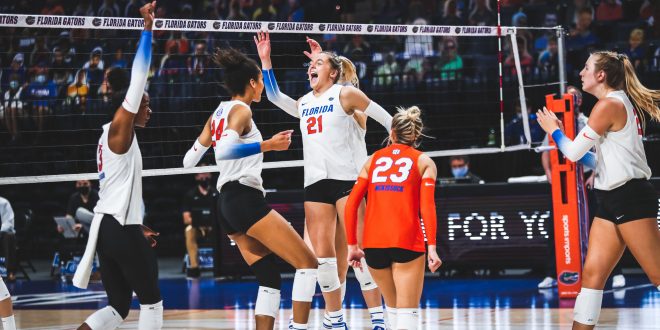 The No. 7 Florida Gators volleyball team (17-3) will hit the road to face the Texas A&M Aggies (9-7) for a two-match series beginning March 24. Both matches are set to begin at 7 p.m. ET and will be available on SEC Network+.

The Florida team holds the 17-1 series advantage over Texas A&M, which includes a 15-1 record under coach Mary Wise.

The Gators hope to take find victory in their last two games of the regular season against the Aggies. The spring portion of the 2020-21 SEC volleyball slate consisted of a 16-match, conference-only schedule. All 16 matches are two-game series.

Last Time Against the Aggies

With their last victory against the Aggies, the 15th-ranked Gators volleyball team clinched its 24th SEC Championship. The Gators became SEC Co-Champions with the Kentucky Wildcats.

Gators in the SEC This Season

This year, the Gators volleyball team has continued its tradition of showing strength in the SEC.

At least one Florida player holds a ranking in SEC categories. Middle blocker, Lauren Forte, is in first place in the SEC for hitting percentage, with her percentage of .500.