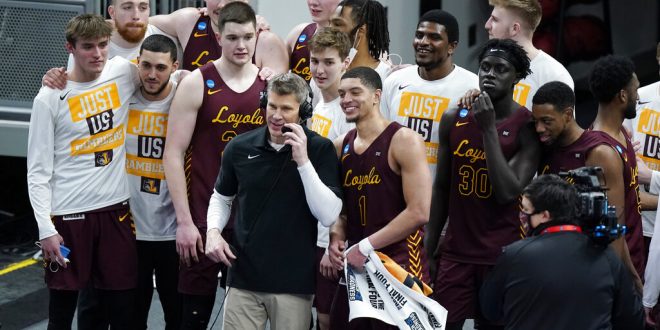 Loyola of Chicago players celebrate with head coach Porter Moser after beating Illinois in a college basketball game in the second round of the NCAA tournament at Bankers Life Fieldhouse in Indianapolis Sunday, March 21, 2021. Loyola upset Illinois 71-58. (AP Photo/Mark Humphrey)

Where to Watch: CBS

Only three years ago, the Loyola Chicago team made one of the most unexpected Cinderella runs ever. Now according to ESPN their team are heavy favorites to return to the Elite Eight. ESPN’s Matchup Predictor gives the Loyola Ramblers an 80 percent chance to move on.

Entering this game Loyola has shut down some of the best offenses in the country beating No. 9 Georgia Tech and upsetting the No. 1 seeded Illinois team. A team that held an 11.9 percent chance to win the entire tournament.

At the helm of the Ramblers besides 101-year old Sister Jean, is center Cameron Krutwig. Krutwig has been the main focal point of the offense averaging 15 points, 6.9 assists and three rebounds on the season. However Loyola’s true offensive strength lies in it’s depth. Eight players for Loyola average at least five points per game.

The defense of the Ramblers is probably the most impressive aspect of this side. The Ramblers are causing turnovers on almost 20 percent of their opponents possessions and limiting teams to .864 points per possession. No longer are the days of shocked victory, Loyola has gained the respect of the nation.

The Oregon State’s key player for this game is Ethan Thompson averaging a team high 19.5 points per game during March Madness. Including a 26 point outbreak against Oklahoma State. While Oregon State hasn’t been shooting lights out at an underwhelming 32.5 percent from three for the season they have made timely buckets to bury opponents as of late.

While Oregon State stays impressive offensively in spurts, the consistency of Loyola Chicago should prevail this game as they hold opposing teams to only 60 points per game. The tale of two Cinderella stories meet, one will prevail and the other ends this Saturday in Indianapolis.

Ethan Sanabria is a second-year telecommunications student on the digital film and television production track at the University of Florida's College of Journalism and Communications. He has previously worked as a broadcaster for the Florida Flight basketball team and currently helps the production of WUFT news facebook lives. You can reach Ethan on any of his social media or at Ethansanabria@ufl.edu.
@ethansanabria
Previous Coach Rowland Talks Gators Gym
Next After Sweeping Texas A&M, Gators Take On South Carolina