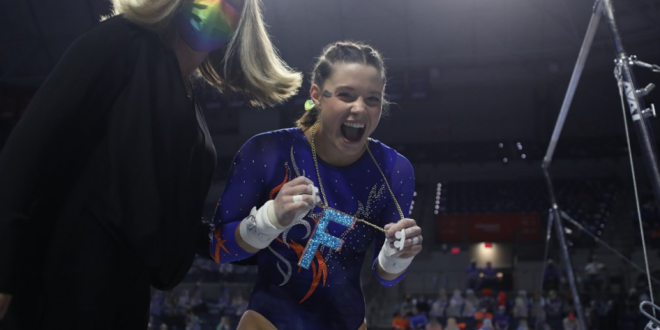 Florida Gators gymnastics placed third in Saturday’s SEC Championships. Going into the meet, the Gators were the No. 1 seed, but were upset by Alabama, who took home the title, and LSU, who came in second.

Going into the tournament, the Gators were the only undefeated team this season in the SEC.

Head coach for the Gators, Jenny Rowland, said that the two losses in the tournament were humbling for the team.

Florida has a quick turn-around time though, before the start of the NCAA Championships. Regionals begin April 1 and go until April 3.

Going into regionals, Rowland said that she wants the Gators to focus more on what they can control in the competition.

Round one and two of the semifinals pick up on April 16. Then, the finals are on April 17.

The Gators are the No. 1 seed for the NCAA Championships. Oklahoma follows closely in second and LSU is third.

With regionals so close, Rowland advised her athletes to not worry about scores or outside factors.

The University of Georgia will host the meet. The Bulldogs were unable to make an appearance in the SEC Tournament, after COVID-19 issues within the program. They are still competing in the Championships, though.

Rowland said that the team has been inconsistent in practice over the past weeks. She said that Tuesday’s practice was back to Florida’s usual caliber.

Coach Rowland won SEC Coach of the Year for 2021. Of her six years with the Gators, this is her third time being nominated for the honor and her second year in-a-row, taking it home.

This is also Florida’s second year in-a-row with an undefeated league season.

In other honors for the Gators this year: junior Leah Clapper won the SEC Scholar-Athletes of the Year award, four Gators made an All-SEC team and one member made the SEC All-Freshman team. Senior Alyssa Baumann, Clapper, freshman Ellie Lazzari and senior Megan Skaggs were the Gators selected for All-SEC teams, and Lazzari was also selected for the All-Freshman team.

Rylee is a third year Journalism major with a specialization in sports and media at the University of Florida College of Journalism and Communications.
Previous Cuse, Houston set for Sweet 16 Matchup
Next Oregon State, Loyola St Chicago Sweet 16 Preview