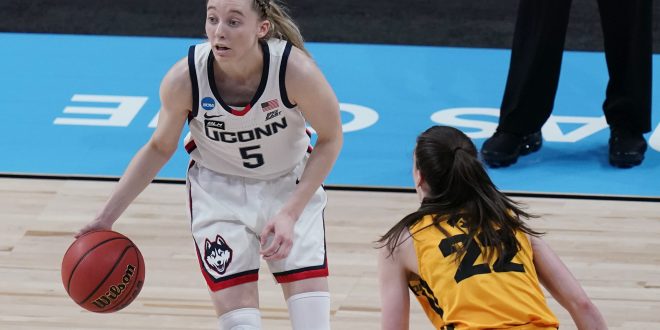 It was a battle of freshmen Saturday afternoon as the UConn’s Paige Bueckers faced off against the University of Iowa’s Caitlin Clark in the Sweet 16.

While Clark averaged 26.7 points per game coming into the game, UConn was able to limit her to only 21 points, while Bueckers had 18 points along with nine rebounds and eight assists. The Huskies advanced to the Elite 8 and will face Baylor for a trip to the final four.

While the Bueckers got most of the attention throughout the season, UConn also had another freshman step up in Aaliyah Edwards. She finished with 18 points and had two blocks as well as two steals.

With Head Coach Geno Auriemma returning from his two-game absence to do COVID-19, junior Christyn Williams played all 40 minutes and had a game-high 27 points. At the same time, Evina Westbrook added 17 as UConn eclipsed 90 points for the ninth time this season and second time in the NCAA Tournament.

The Huskies now have won 27 of their 28 games his year, with their lone loss coming to the University of Arkansas.

For Iowa, their season comes to an end following the loss. They finished the year at 20-9 as they also advance to the Big 10 Championship before losing to Maryland. Iowa, though, has an extremely bright future ahead of them, with Clark, only a freshman.

They will be returning Monika Czinano in 2021-22 for her senior season as she averaged just under 20 points per game. Iowa only has two seniors on their roster this year.

For Uconn, this will be their biggest test of the season as they will face (2) Baylor. It was not easy for the Lady Bears in the Sweet 16 though as they were pushed to overtime against (6) Michigan in their 78-75 win. Baylor comes in with a record of 28-2 on the season and winners of 20 straight. 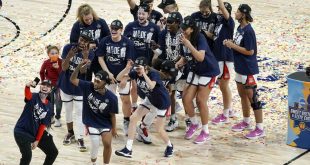 The No. 1 seed Connecticut will square off with the No. 3 Arizona in the …