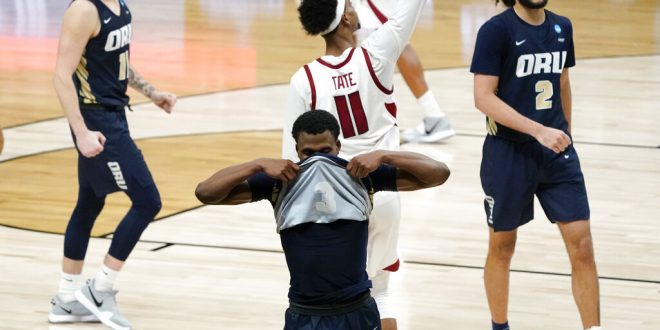 Down by two with 3.1 left on the clock, Oral Roberts got the look they wanted to win it. Max Abmas caught the ball at the opposite free-throw line, took three dribbles through traffic up the right sideline, and rose up for a three at the wing.

The sophomore guard had hit plenty of big shots during the Golden Eagles’ improbable run to the Sweet 16. Yet, the one to keep the season alive went off the front iron. After the buzzer sounded, he buried his face in his jersey, in disbelief of the result.

ORU’s season came to a heartbreaking close last night, coming up short in the final seconds against Arkansas 72-70.  In an overall ugly game they were trailing in at the half, the Razorbacks answered the call, outscoring the Eagles by 9 after the break.

With the game tied at 70 with 2.9 seconds left, Arkansas freshman Davonte Davis hit the Pigs’ biggest shot of the tournament yet. A difficult and much-needed 10-foot jumper fell and gave the Razorbacks their first lead since the seven-minute mark of the first half.

Neither squad shot the ball very well considering the fast pace of the game, Oral Roberts going 26-61 and Arkansas 29-77 from the floor respectively. The Razorbacks went a mere 1-9 behind the arc, well below their average of 7.4 threes a game. A plus-11 margin on the glass, including 18 offensive rebounds, allowed them to climb back into contention.

ORU junior forward Kevin Obanor was not his usual self, scoring only 11 points on 4-7 shooting after leading the Golden Eagles in scoring their first two tournament games. Abmas led all scorers with 25 points; Jalen Tate was not far behind, chipping in 22 for Arkansas.

Becoming only the ninth 15-seed to upset a 2-seed in the history of the NCAA Tournament, Oral Roberts’ amazing run started even before their name was called on Selection Sunday.

The fourth-place team in the Summit League needed to win out to make it to the Big Dance. They did just that as they upset No. 1 South Dakota State and No. 3 North Dakota State to clinch the title and a bid to March Madness.

In their first-round matchup against Ohio State, they were a 16-point underdog against the Buckeyes. 11 made three-pointers and a 30-point outing from Obanor made for an overtime instant classic and a quick exit for one of the Big 10’s premier teams. Ohio State was haunted by 16 turnovers despite outshooting and outrebounding Paul Mills’ squad.

Two days later, the Golden Eagles would make history again, this time against the Gators. Obanor and Abmas combined for 54 points as ORU was again the poorer shooting team and grabbed fewer rebounds. Florida turnovers made a late 11-point lead disappear as the Eagles joined 2013 Florida Gulf Coast as the only two 15-seeds to ever make the Sweet 16.

Max Abmas had one of the gutsiest months in college basketball history during ORU’s incredible streak. Since the Summit League tournament began, Abmas did not leave the floor, playing in every possible minute (245) of the Eagles’ six postseason games.

After their loss last night, head coach Paul Mills acknowledged the disappointment in their season ending, but expressed the great pride that he has in his small, Christian school from Tulsa, Oklahoma.

As for the Razorbacks, they are on quite a streak of their own, winners of 14 of their last 16.

In Eric Musselman’s second year at the helm in Fayetteville, Arkansas made the jump to the elite in the SEC with a number of historic accomplishments. Their No. 8 ranking in the AP Poll heading into the postseason was their highest since the 1995 runner-up team, the same for their No. 3 seed in the NCAA tournament.

Star freshman Moses Moody is leading the way for the Pigs. He garnered both SEC First Team and SEC Freshman of the Year honors and is expected to be a top-10 pick in this year’s NBA draft.

They easily took down 14-seed Colgate in their opening matchup of the tournament. Texas Tech was not as easy as a foe in the Round of 32, as the Razorbacks escaped with a two-point victory.

Now, they look forward to a huge Monday night matchup with a Final Four berth on the line. Musselman and his team will have their work cut out for them against Scott Drew and the No. 1 Baylor Bears.

Caleb Wiegandt is a first-year Journalism student on the Sports and Media track in the University of Florida's College of Journalism and Communications. He has previous bylines in USA Today, Yahoo Finance, and The Louisville Courier-Journal before arriving at ESPN Gainesville. Caleb is a proud graduate of Holy Cross High School in southwest Louisville, Kentucky, where he was born and raised. You can reach Caleb at cwiegandt@ufl.edu.
@@CalebWiegandt
Previous Loyola Chicago’s NCAA Basketball Run Ends in Sweet-16
Next UConn’s Bueckers Edges Iowa’s Clark in Freshmen Showdown