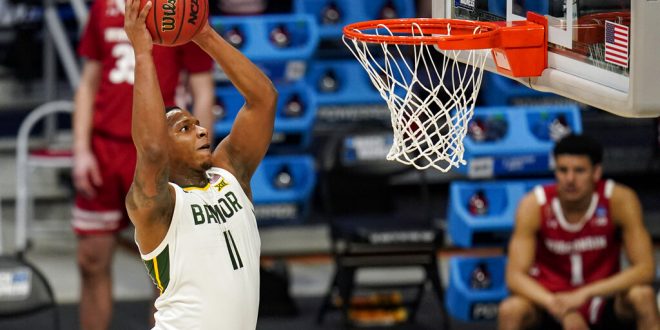 Baylor guard Mark Vital (11) gets a dunk against Wisconsin in the first half of a second-round game in the NCAA men's college basketball tournament at Hinkle Fieldhouse in Indianapolis, Sunday, March 21, 2021. (AP Photo/Michael Conroy)

Baylor vs. Arkansas: Preview and Predictions

The No. 3 seed Arkansas Razorbacks (25-6) battle the No. 1 seed Baylor Bears (25-2) on the court Monday night. This South Regional Elite 8 game is being played at Lucas Oil Stadium in Indianapolis. Tip-off is scheduled for 9:57 p.m.

Just to get you more hyped for the #Arkansas v. #Baylor Elite 8 game tonight. Here's @HunterYurachek after the Sweet 16 win.#Elite8 pic.twitter.com/TK7uLM78ku

How Each Team Got Here

In their Sweet 16 matchup, The Razorbacks barley beat the Oral Roberts Golden Eagles on Saturday, 72-70. Davonte Davis is to thank for Arkansas’ win. He hit a short jumper with 2.9 seconds left in the game. This is the first time in 26 years Arkansas has advanced to the Elite Eight in the NCAA Men’s Tournament.

Baylor relied heavily on its defense in its Sweet 16 game. The Bears knocked out the Villanova Wildcats Saturday night, 62-51. The second-half was the turning point of the game as Villanova only scored 21 points during the final 20 minutes. This was all thanks to the aggressive Baylor defense. Baylor Men’s Head Coach Scott Drew said the team is really excited to still be in the bubble. They are getting geared up to play a good Arkansas team.

The Razorbacks will have to watch out for Baylor’s strong defensive plays from Bear’s guards. Arkansas Men’s Head Coach Eric Musselman said his team needs to avoid catastrophic, live-ball turnovers and continue to move to the basketball around the court.

Musselman also added that Baylor’s defense will attack the ball, and it’s important the Razorbacks have patience in the game.

As for Baylor’s perspective, Drew said Arkansas puts a lot of pressure on its opponents. He similarly said his team will have to watch out for Arkansas as it does a good job taking advantage of turnovers and long rebounds.

He continued on saying the Razorbacks play with a lot of confidence and momentum. “It doesn’t matter if you’re up, you’re down,” Drew said. “They’re never out of it with their athleticism and toughness.”

Arkansas normally shoots a lot of 3-pointers; however, they weren’t making or taking a lot of 3-point shots in the Oral Roberts game. We should expect to see the team redeem themselves offensively in Monday nights matchup.

As for Baylor, their defense will be tough to beat. The Bears are a top-30 defense ranked No. 3 in the nation in turnover rate.

The odds point in Baylor’s favor. They are the No.1 seed, and its defense took care of Villanova. We will see who comes out on top to take a spot as one of the Final Four.

Kaitlyn Wadulack is a third-year journalism student specializing in sports and media at the University of Florida. You can reach Kaitlyn at k.wadulack@ufl.edu
Previous Elite 8 Matchup- Arizona v. Indiana
Next Florida Soccer Ties Georgia in Double Overtime