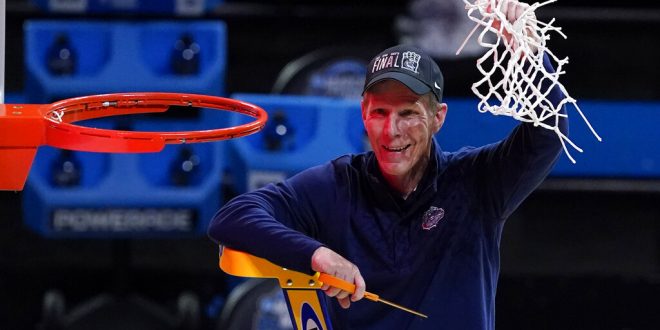 The Gonzaga Bulldogs are still dancing. After beating the USC Trojans, they move on to the Final Four and stay undefeated on the season.

How the Gonzaga Bulldogs got here

The Bulldogs went 26-0 through their regular season. They did not just play easy opponents either. They beat four ranked opponents this season: 6 Kansas, 11 West Virginia, 3 Iowa, 16 Virginia.

Since the start of March Madness, the Bulldogs have gone 4-0. They have beaten 16-seed Norfolk State, 8-seed Oklahoma, 5-seed Creighton, and 6-seed USC Tuesday. 24 points has been the average win margin.

Early in the first half, one official, Bert Smith, collapsed near the Gonzaga bench. Smith stayed on the floor for about five minutes before getting up and walking to a stretcher. He was not taken to the hospital, according to the NCAA.

“I was able to stick my head in there a little bit and see that he was talking and coherent and tried to say a quick prayer for him and just wished him the best,” Gonzaga coach Mark Few said after the game.

Mark Few said his team will take the time to appreciate this victory and making it to the Final Four. “These are special accomplishments and they need to be celebrated,” he said.

Looking to the next matchup, the Gonzaga Bulldogs will be playing 11-seed UCLA. The Bruins are just the sixth double-digit seed to make the Final Four ever.

UCLA beat Michigan State in the First Four to make it into the tournament. Since then, they have beaten 6-seed BYU, 14-seed Abilene Christian, 2-seed Alabama, and 1-seed Michigan.

The Bulldogs take on the Bruins Saturday.

Jensen Young is a journalism student at the University of Florida. He works as a sports writer for WRUF.com and is the voice of trendings on Wednesday mornings on the WRUF radio station.
@Jensen_Young9
Previous Gators Softball Hits Road for Midweek Game
Next Gators Host Pro Day