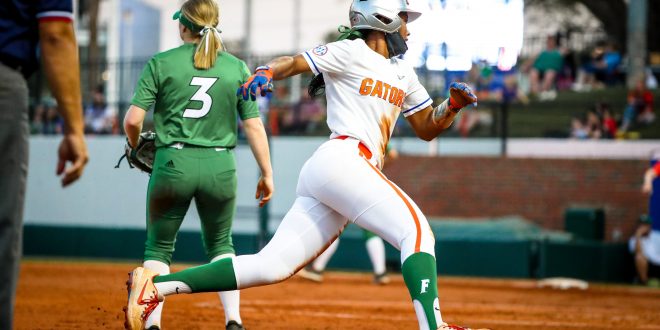 After this past weekend’s sweep over LSU, Gators Softball hits the road for a midweek matchup with Jacksonville University. The Gators and Dolphins met earlier this year in Florida’s home opener. The Gators walked out 1-0 winners on a Hannah Adams walk-off double.

Rematch with the Dolphins

Despite the 1-0 score, the lone meeting this season between JU and UF did not disappoint. A pitching duel between Florida’s Elizabeth Hightower and Jacksonville’s Alyssa Bilodeau broke out. Katie Chronister relieved Hightower in the fifth inning, and the contest continued without any runs into the seventh inning.

Since the victory, both teams have played well, with decent runs of form coming into Wednesday’s game. Florida recently swept No. 13 LSU. JU swept Stetson before dropping two of three against Florida Gulf Coast.

One part of Jacksonville’s game that makes them a threat is their pitching. In their previous meeting, Alyssa Bilodeau allowed nine hits, but the Gators were unable to crack her game.

On the season, Bilodeau is 8-6, but do not let that take away from her performance on the season. In her 94 innings pitched thus far, opposing teams have only mustered 62 hits against 112 strikeouts. Bilodeau and Skylar Whitty account for 15 of the Dolphins’ 17 wins. Their combination poses the same threat as LSU did this past weekend for the Gators.

It will come down to Florida getting hits, which have been coming in bunches.

Julia Cottrill, Jaimie Hoover, Emily Wilkie and Baylee Goddard. These are not the usual suspects on the Florida softball team when it comes to key hits.

However, these are the players that delivered in the three victories over LSU over the weekend. Walton says any time the likes of Charla Echols and Kendyl Lindaman go a game without hits as they did Sunday, he would never expect his team to dominate offensively.

In fact, Julia Cottrill’s performance earned her SEC Newcomer of the Week honors after picking up seven hits in four games. Cottrill picked up five RBIs over the weekend against LSU.

Walton says this is the ideal spot for a launching point in her form for the remainder of the season.

A game against Jacksonville’s elite pitching should provide a good litmus test for Cottrill.

Florida’s game against Jacksonville is set to begin at 6 p.m. on Wednesday. Coverage will be on a YouTube stream through Jacksonville University or can be heard on ESPN 98.1 FM – 850 AM WRUF.

Originally from Seminole in the Tampa Bay area, Kyle is a contributor for ESPN Gainesville as well as local NPR and PBS affiliate WUFT. Kyle wants to get into sports with a lofty dream of being a sports broadcaster. He was raised playing soccer and baseball while watching hockey and football, so the knowledge about various sports is fairly extensive.
@KyleFanslerUF
Previous No. 1 Stanford vs No. 2 Louisville Elite 8 matchup
Next Gonzaga Bulldogs Reach Final Four for Second Time Ever