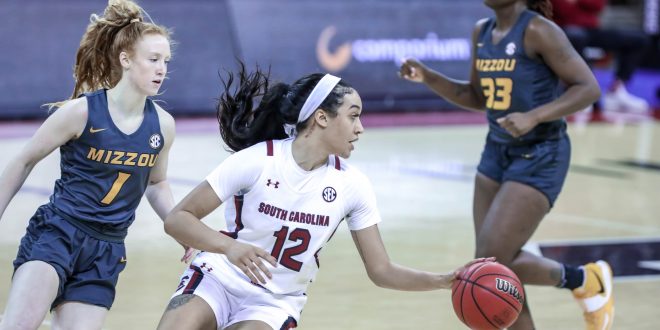 The University of South Carolina Gamecocks, under the direction of coach Dawn Staley play The Temple Owls on Thursday, Dec. 17, 2020 in the Colonial Life Arena in Columbia, SC.

No. 1 seed South Carolina Gamecocks advances to the final four since 2017 when they won the national championship. The Gamecocks defeated six seed Texas Longhorns 62-34.

The Gamecocks defense was impressive against the Longhorns offensive attack last night. They held Texas to zero points in the fourth quarter and 23 percent shooting from the field.

South Carolina also limited their shooting to 20 percent behind the three-point line and blocked 14 of their shots. Sophomore forward Laeticia Amihere had a significant impact off the bench by recording nine blocks in the game and seven defensive rebounds to contribute to the Gamecocks’ tight defensive play.

On the offensive end, five players scored in double figures in their win. Sophomore guard Zia Cooke was the leading scorer with 16 points and six rebounds. Junior guard Destanni Henderson and junior forward Victaria Saxton each scored 12 for the Gamecocks.

Sophomore forward Aliyah Boston and Amihere both scored 10 points in the blowout win Tuesday night. The offense led out to an 18-7 lead in the first quarter and slowly grew over the next three quarters, even with the Gamecocks taking a 19 point lead in the third quarter.

Texas seasons comes to a close

Texas season didn’t go as planned, as their hopes of reaching the final four ended in a loss against the Gamecocks. The team couldn’t get it going offensively or defensively Tuesday night.

Texas was 14-61 from the field and 3-15 from behind the arch, which was a low for the team this season. Junior guard Audrey Warren scored a team-high 13 points on 5-of-8 shooting and was the only player in double digits.

Despite the loss, this season will still be historic as Vic Schaefer‘s first season in charge led the Longhorns to an elite 8 appearances. Schaefer’s run through the NCAA Tournament makes him the ninth coach in Division I history to lead two different programs to the Elite Eight.

South Carolina will take on Stanford Friday at 6 p.m. in the final four. The matchup will be a competitive one as whoever wins advances to the championship.