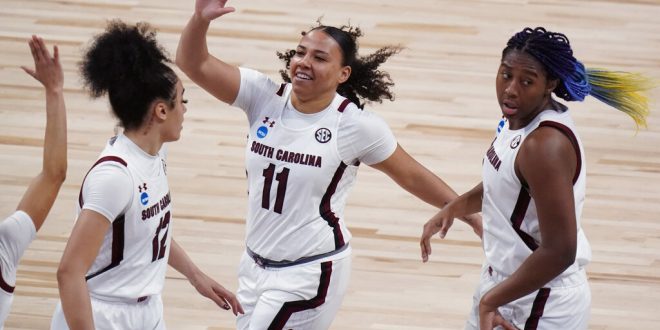 South Carolina guard Destiny Littleton (11) celebrates a score against Georgia Tech during the first half of a college basketball game in the Sweet Sixteen round of the women's NCAA tournament at the Alamodome in San Antonio, Sunday, March 28, 2021. (AP Photo/Eric Gay)

Texas Looks to Upset No. 1 Gamecocks

As the NCAA Women’s Tournament moves closer and closer to the Final Four, two familiar coaches will face off to earn a spot in the final weekend of the Big Dance. Dawn Staley, head coach of the one-seed South Carolina Gamecocks and Vic Schaeffer, head coach of the underdog Texas Longhorns. These two leaders have met in the tournament before, and they will meet again on Tuesday in the Elite Eight.

In 2017, the Gamecocks defeated the Mississippi State Bulldogs to clinch their first-ever national championship. The head coach of the Bulldogs was Schaeffer, who will now have a chance at a rematch with his new team in Texas. The two coaches have faced off a total of 15 times before Tuesday, and Staley has enjoyed every matchup. Now, with a shot at the Final Four on the line, Staley is excited for the rematch.

Up to this point in the tournament, Carolina has not been challenged. The Gamecocks have won all of their games by at least ten points. While one would expect for the final game of the tournament, the national championship, to be the most difficult, Staley views the Elite Eight as the hardest matchup.

One player that Staley has surely prepared her team to defend is junior Charli Collier. The forward notched a double-double in the Longhorns win over Maryland on March 28. Stopping her will surely be a large goal for the Gamecocks.

Despite going to battle for years, Schaeffer respects and admires Staley as a competitor. As Texas tries to pull off the upset in his first year on the job, Schaeffer is excited to kickstart his tenure in Austin with a huge win.

The Elite Eight matchup between Texas and South Carolina starts at 7:00 p.m. The game can be viewed on ESPN.

Carson Cashion is a second-year student at the University of Florida, and has a major in journalism with a specialization in sports and media. Originally from the Orlando area, Cashion has covered the UF Gymnastics team as well as Oak Hall athletics for ESPN Gainesville.
Previous USC and Gonzaga Fight for a Spot in the Final Four
Next No. 1 Stanford vs No. 2 Louisville Elite 8 matchup