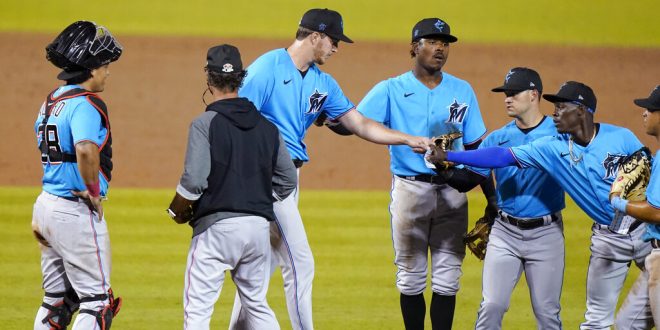 A playoff run last season showed potential from the Miami Marlins. They come in this season with hopes of an even longer playoff run.

The Marlins made their first playoff berth in 17 years. They defeated the Chicago Cubs in the first round and then dropped the series against Atlanta.

Some say that an irregular 60-game season might have given the Marlins some help as they were able to sneak into the playoffs with just 31 wins.

This might create doubts on whether or not there was actually improvement from the team.

But FOX Sports reporter and in-game reporter for the Marlins, Jessica Blaylock, says that those are not valid points.

(Courtesy of Sportscene with Steve Russell)

Blaylock says that people should not count the Marlins out, as despite every circumstance, they earned their spot in last season’s playoffs.

A young roster might be the key to continuing to improve and proving that the Marlins are a legit team.

Miami’s oldest pitcher among their eight best arms is left-hander Daniel Castano, who is 26 years old.

Sandy Alcántara and Pablo López, who are both 25 years old, enter the season as the Marlin’s top-two pitchers.  The team could also potentially include Max Meyer, the No. 3 pick in the 2020 draft, in their roster later on the season.

Miami also has Sixto Sánchez and Edward Cabrera who are showing star potential. They are both 22-years old, with Sanchez making his MLB debut on his 22nd birthday.

Even Miami’s left-handed pitcher, Trevor Rogers recognizes their depth at the pitching lineup.

“The pitching depth we have in this organization is scary,” Roger says.

Although many of these young athletes have potential, it all comes down to how they keep adapting to the major league.

Sánchez has done a good job so far, as he went 3-1 with a 1.69 ERA in his first five starts. He also threw five shutout innings against the Chicago Cubs in the playoffs.

“We’re not a club that’s old, and this is what we’re going to be,” Mattingly says. “This is a club that has a chance to constantly improve.”

The Marlins will also start this season with a new general manager, Kim Ng. She was hired in November as the first female general manager in the MLB.

Despite a tight budget, Ng was able to recruit right fielder Adam Duvall, who is now a starter for the Marlins.

Miami was also able to acquire first baseman Jesús Aguilar, a 2018 All-Star athlete. Aguilar is now with the Marlins after a dismissal in 2019.

Another change this season is the renaming of the Marlins Ballpark, which will now be called LoanDepot Park. The Marlins made the announced the multiyear naming rights agreement on Wednesday through their social media.

LoanDepot is a financial company based in Southern California.

This agreement will bring more revenue for the Marlins. The extra revenue will help the Marlins start stepping away from tight budgets and payrolls.

Marlins CEO Derek Jeter believes the extra revenue will also help them spend more money on players in the future.

“We have done a pretty good job of loading up our minor league system with a lot of prospects, and we’re going to give them an opportunity to play,” Jeter said. “When we get to the point where we’re trying to fill some holes, we’ll do that.”

The Marlins games will also be televised differently now. They will move on from FOX Sports Florida and will now be televised through Bally Sports.

(Courtesy of Sportscene with Steve Russell)

Camila is a senior at the University of Florida, who served as a beat writer for the women's basketball team from 2019 until the 2021 season. She was also a beat writer for the Gators football team during the 2020 season. Camila is also WUFT's news director as well as a sports reporter/anchor.
@CamilaMaffuz
Previous Florida Gymnastics Looks to Rebound at Regionals
Next Jonathan India Makes Reds Roster, other Gators in MLB