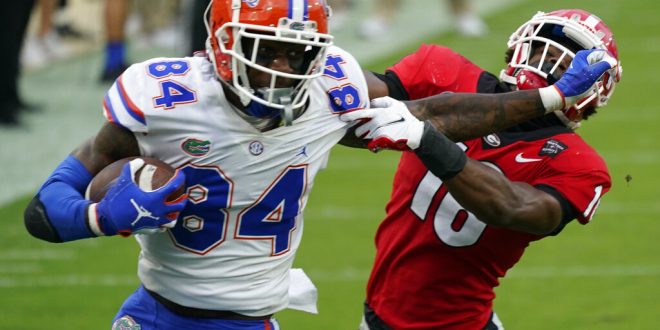 FILE - Florida tight end Kyle Pitts (84) tires to get past Georgia defensive back Lewis Cine (16) after a reception during the first half of an NCAA college football game in Jacksonville, Fla., in this Saturday, Nov. 7, 2020, file photo. Kyle Pitts is arguably the most dynamic playmaker in the NFL draft, a versatile tight end who will try to impress league executives in person during Florida's pro day Wednesday, March 31, 2021. (AP Photo/John Raoux, File)

Kyle Pitts‘ stat line from last season is no joke: 43 catches, 770 yards and 12 touchdowns in only seven-and-a-half games. His yardage and touchdown totals led all FBS tight ends.

So, it’s no surprise that he put on a show at the Florida Gators pro day on Wednesday. And the 6-foot-6 and 245-pound tight end impressed with more than just his football skills.

Initially, Pitts used his measurables to impress his pro day audience. His 83 3/8-inch wingspan is longer than any NFL wide receiver or tight end in the last 20 years. It broke DK Metcalf’s record of 82 7/8 inches.

Then, he recorded a couple of sizeable jumps. Pitts climbed up for a 33 1/2-inch vertical and launched himself 10 feet, 9 inches in the broad jump. He showed off his strength during the bench press with 22 reps of 225 pounds.

Finally, the most eye-catching part of his pro day was the 40-yard dash. He showcased his speed with an unofficial time of 4.44 seconds.

In comparison, Las Vegas Raiders tight end Darren Waller ran a 4.46 at the NFL Combine. Pitts said he believes his skills will translate well to the league because of the evolution of the tight end position.

He has been training with Justin Fields, Jaycee Horn and Micah Parsons in California since they signed with the same agency. Now, they have a group chat and Pitts said he couldn’t wait to see what they had to say about his pro day performance.

How High Will He Be Drafted?

After a dominant pro day, the next question to answer is where Pitts will land in the 2021 draft. It’s more than likely that he’ll be a top-10 pick: all of the teams of the four head coaches in attendance for Florida’s pro day have top-10 picks.

Furthermore, Pitts has the chance to be the highest-drafted tight end in the modern era. So far, the record belongs to Riley Odoms, who was drafted fifth overall by the Denver Broncos in 1972. Regardless of where he goes, Pitts said he thinks he will be the best tight end in NFL history at the end of his career.

Pitts will attend Round One of the 2021 NFL Draft on Apr. 29. He said he’s honored to be invited, but he’s clearly nervous.

Sound used in this story courtesy of GatorVision.