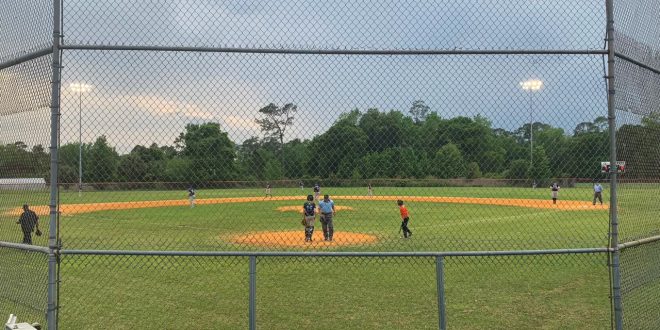 PK Yonge ready as bottom of the third inning begins.

The PK Yonge Blue Wave (11-2) Baseball game against the Hawthorne Hornets (0-8) was abruptly cut short Tuesday afternoon. The game first became delayed due to lightning in the area. The weather forecast only became worse as time went by, and it was shortly announced that the game was over.

PK Yonge had previously beaten Hawthorne 17-1 at the beginning of the season. Despite not being able to repeat similar results, the game still ended with PK Yonge ahead 8-0.

PK Yonge also had their Spring Break last week, so Coach Rob Brunson hoped to use this game to get the rust off his players. The team usually goes on trips and spends time playing baseball together, but they could not do that this year due to COVID. Although a full game could not be played, but they definitely “started to come around for sure.”

The game started out slow with neither team scoring during the first inning. However, things quickly turned around for PK Yonge when senior Timmy DePaul hit a triple at the top of the second inning. Sophomore Lane Sparkman’s left field hit allowed DePaul to safely make it across home plate and secure PK Yonge their first run of the game.

PK Yonge scored another three runs, which Hawthorne was not able to counter, and the second inning ended 4-0.

The top of the third began with a single by senior TJ Shay. When it was DePaul’s turn up to bat, he did not disappoint and hit one right out of the park. This was DePaul’s third home run of the season and gave PK Yonge another two runs to widen the score gap.

At the bottom of the third, Hawthorne was unable to score as junior pitcher Cole Thompson got back-to-back strike outs. The third inning ended 7-0.

After a run from Sophomore Thomas Shay, the game ended at the top of the fourth inning due to weather.

When asked how the team will continue to progress and what he hopes to work on, Brunson replied the following.

The PK Yonge Blue Wave will go up against the Chiefland Indians and Oak Hall Eagles later this week.