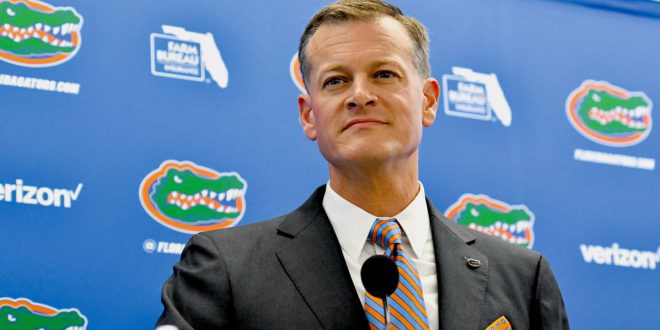 In his talk, Stricklin said that the University Athletic Association has been working closely with UF Health for guidance. He said that its suggestions included approval for the decrease of social distancing guidelines to three feet, rather than six.

He continued on to say how vaccinations have also been helpful in the process of getting sports back to normal.

Starting Monday, COVID-19 vaccinations will be available for all UF students, provided and distributed by UF Health. This announcement went out to UF students following Governor Ron DeSantis’ message about changes in vaccine eligibility.

Stricklin said that the increase in vaccination eligibility is crucial. He said they are important for opening up sports to full audiences starting in the fall.

Another big question in the Gator community has been the future employment status of the Head Coach of the men’s basketball team, Mike White. Scrutiny over his coaching performance has accelerated since the Gator’s defeat to Oral Roberts in round two of the NCAA Tournament.

Stricklin expressed fervently that the White will not be going anywhere for the foreseeable future and that he has been in discussion with White.

He went on to say that White’s record since coming to UF is similar to that of former Gators coach Billy Donovan. Stricklin said that Donovan’s first few seasons as a coach were not chock-full of wins. He compared that to White’s career.

Using Donovan as an example, Stricklin said that he values White putting teams in positions to win. He said that he obviously wants all Gator teams to win but that those positions are a start.

Rylee is a second year Journalism major with a specialization in Sports and Media at the University of Florida College of Journalism and Communications.
Previous Charlie Strong Talks New Gig in NFL
Next Lon Kruger Former Gators Basketball Head Coach Retires