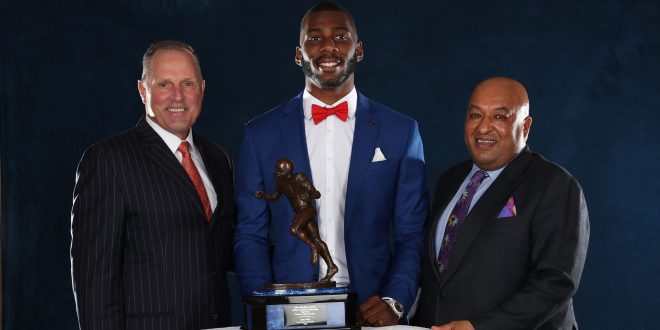 Kyle Pitts is the second tight end in Gators history to win the Mackey Award. Head coach Dan Mullen, tight end coach Tim Brewster, and award chairman Jerry Mackey were in attendance for Pitts’ award ceremony on Thursday. The John Mackey Award is presented annually to a “‘true tight end’ in the style of John Mackey”, according to the official JMA criteria.

“Dedicated to the life of John Mackey himself, the award seeks to keep on driving true passion, dedication and at the same time raise health awareness for the Game of football in schools, especially in colleges and among the youth generally,” says the award’s website.

Pitts showed his gratitude to his coaches and Mackey when receiving the award.

Pitts’ family watched proudly as he unveiled his brick on Thursday. It is located at the entrance of the Heavener Football Complex. The 20-year-old is the first unanimous first-team All-American since Vernon Hargreaves III in 2015, whose bricks reside right above Pitts’. Both athletes were named AFCA, AP, FWAA, Sporting News and Walter Camp First Team All-Americans.

Since joining the team in 2018, Pitts has been honored with award nominations on many occasions.

Pitts is looking toward the future. He impressed onlookers at the NFL Pro Day on Wednesday. Pitts is proving why teams should be watching him closely – and they are.

Florida quarterback Emory Jones discussed how Florida needs to improve as the season continues. The …