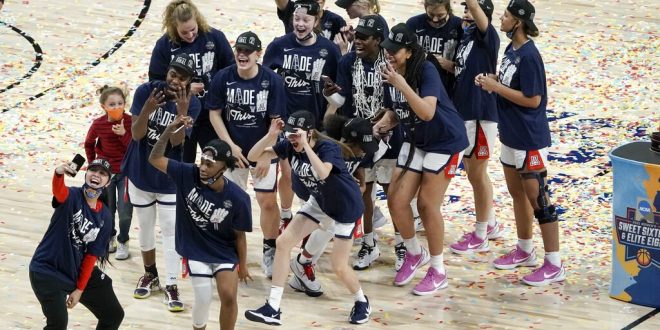 The Arizona team poses for a picture after an NCAA college basketball game against Indiana in the Elite Eight round of the Women's NCAA tournament Monday, March 29, 2021, at the Alamodome in San Antonio. Arizona won 66-53 to advance to the Final Four. (AP Photo/Morry Gash)

The No. 1 seed Connecticut will square off with the No. 3 Arizona in the Final Four of the Women’s NCAA Tournament Friday night. The Huskies find themselves in familiar territory, as the leader in national titles with 11. Meanwhile, the Wildcats enter their first Final Four game in program history as double-digit underdogs. Additionally, they’re the only remaining team that isn’t a number one seed.

So, what will it take for Adia Barnes’ Wildcats to pull off the upset, and inversely, what can Bueckers and company do to continue their title run?

Who Can Stop Them?

For a program with a successful history like UConn Women’s Basketball, this year’s team is certainly meeting the standard. The Huskies boast a 28-1 record, and Paige Bueckers became the first-ever freshman to win AP Player of the Year. Bueckers isn’t alone either; the Huskies have all kinds of talent all over the court.

The first freshman EVER to win AP Player of the Year. pic.twitter.com/LSdTmDv7aF

Christyn Williams, the Huskies’ other guard, made it on the All-Big East First Team after averaging 16.1 points per game on the regular season. And Olivia Nelson-Ododa earned Big East C0-Defensive Player of the Year honors.

On top of that, the Huskies haven’t particularly struggled through the NCAA Tournament to this point. They won their first three games by an average margin of 33 points. The only exception to their dominant tournament run has been a tight contest with the No. 2 seed Baylor Bears. But UConn ended up pulling out the 69-67 victory against a 28-3 Baylor team that had a strong chance of winning it all in their own right.

With the Huskies pegged as 13.5-point favorites in Friday’s game, it’s clear that some are expecting UConn to kick it back into cruise control against Arizona. But there’s a reason the Wildcats are playing in their first NCAA Tournament since 2005. And her name is Aari McDonald.

In their first NCAA Tournament since 2005, the Wildcats aren’t out there for moral victories. Although they struggled down the home stretch of the regular season, losing three of their last four, the Wildcats have caught fire in San Antonio. Leading with victories against double-digit seeded teams in the first two rounds, Arizona then faced a high-caliber opponent in the Sweet 16.

They took down No. 2 seeded Texas A&M in a convincing 74-59 victory and then proceeded to win by double digits again against No. 4 seeded Indiana. So, they’ve faced their fair share of tough competition and prevailed.

So, how can Arizona continue its dream run and down UConn? The key is going to be keeping pace offensively because it’s been proven that very few teams can slow the Huskies’ scoring down. Even in their only loss of the season to Arkansas, UConn still put up 87 points in a 90-87 loss. So, McDonald will need to have another excellent game, and she’ll have to get her teammates involved too.

The game is set for 9:30 Friday night on ESPN. An appearance in the Championship game is on the line.

I'm a third-year student at the University of Florida passionate about storytelling and sportswriting. My goal is to work in communications for a professional sports team after I graduate.
Previous Final Four: South Carolina and Stanford Women’s Basketball Preview
Next Kyle Pitts Honored with Mackey Award and Brick Unveiling