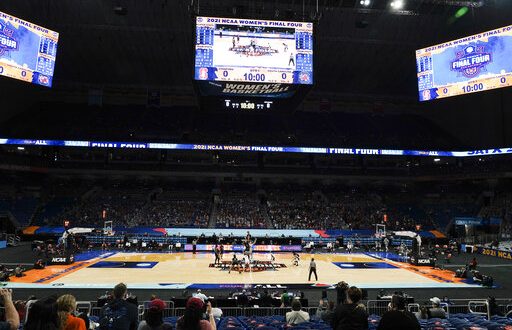 Players get set for the opening tipoff at the start of a women's Final Four NCAA college basketball tournament semifinal game between Stanford and South Carolina Friday, April 2, 2021, at the Alamodome in San Antonio. (AP Photo/Morry Gash)

Since 1992, no Pac-12 women’s basketball team has won a national championship title. For the Conference of Champions, that is guaranteed to change Sunday night when no. 1 Stanford (30-2) and no. 3 Arizona (21-5) will face off in the final game of the 2021 NCAA Tournament.

Both teams enter playing superb defense; each ranked in the top-15 in the nation in opponent’s scoring average during the regular season (Stanford: no. 8, 53.1 ppg; Arizona: no. 15, 55.2 ppg). Both teams also are coming off victories against women’s basketball powers, Stanford defeating South Carolina at the buzzer and Arizona handling Connecticut.

Stanford swept the regular-season series between the two without much of a challenge, but Adia Barnes’ Arizona squad has been one of the hottest teams and best stories of the bubble in San Antonio.

Take a look at how both teams got here and what to expect when they face off tomorrow at 6 pm.

Stanford Looking To Finish The Job

The no. 1 overall seed is looking to do what was expected of them tomorrow night in the Alamodome. Prior to Friday, Tara VanDerveer’s Cardinal had produced a dominant tournament effort without many close games. Dawn Staley’s Gamecocks gave them an exceptional challenge that turned into a Final Four classic.

South Carolina raced out to an early lead as large as nine in the 1st quarter. Stanford brought the game to a 15-15 draw by the end of the period thanks to a few jumpers from Lexie Hull and Haley Jones. A largely back-and-forth second quarter gave the Cardinal a six-point lead heading into the halftime break.

Jones was spectacular, leading Stanford with 24 points on 11-14 shooting. 11 of those points came during a 3rd quarter in which Stanford regained a nine-point lead. Aaliyah Boston and Zia Cooke kept it close for South Carolina. Boston would finish with a double-double of 11 points and 16 rebounds while Cooke led all scorers with her 25 points and five made three-pointers.

It would come down to the final possession. Up one with the ball and eight seconds left, Boston stole the ball near midcourt and handed it off to Brea Beal. Beal pounded down the court and missed a layup, so did Boston’s put-back as time expired. In their closest tournament game yet, Stanford survived 66-65.

Prior to their date with the Gamecocks, Stanford’s toughest matchup was a game they came back from thanks to hot shooting against Louisville in the Alamo Region Final. Now, they look ahead to a difficult test against the hottest team in the country in the Wildcats.

Their starting five is loaded in talent. Any team would have trouble in the backcourt containing the scoring trio of Kianna Williams, Haley Jones, and Lexie Hull. The Cardinal have great size underneath in talented freshmen Fran Belibi and Cameron Brink. Tara VanDerveer was the last Pac-12 coach to win a title in 1992. If Stanford sticks to its game plan and plays the way they’ve played all year long, they’ll win it again tomorrow night.

Upsetting no. 2 Texas A&M and beating no. 4 Indiana earned Arizona their matchup with the dynasty that is UConn basketball and Geno Auriemma. Not many believed this squad could matchup with AP Player of the Year Paige Bueckers and the many talents on a loaded Huskies roster. Connecticut was favored by as many as 14 points by sportsbooks. A 69-59 win for the Wildcats kept them dancing against all odds.

The Wildcats got the job done in a game that was surprisingly not close. Arizona defensively suffocated the Huskies, never allowing them to be comfortable in their offensive sets. UConn shot only 36% from the floor, well below their 55% team average on the year. Bueckers still managed 18 points although on 5-13 shooting as the Wildcats clamped in on her like they needed to win.

Aari Williams was the big story offensively, leading Arizona with 26 points for the night and shooting 4-9 behind the arc. Her ability to get to the free-throw line down the stretch and secure easy points for the Wildcats sealed the game as UConn couldn’t shake the tough interior defense.

Williams will likely hear her number 2 called quite a bit in tomorrow’s matchup with Stanford; they’ll look to get Stanford’s bigs in foul trouble early with her driving to the basket. If Arizona can keep the defensive pressure on Stanford’s backcourt like they have been all tournament, it could be the underdog Pac-12 team cutting down the nets tomorrow.

Caleb Wiegandt is a first-year Journalism student on the Sports and Media track in the University of Florida's College of Journalism and Communications. He has previous bylines in USA Today, Yahoo Finance, and The Louisville Courier-Journal before arriving at ESPN Gainesville. Caleb is a proud graduate of Holy Cross High School in southwest Louisville, Kentucky, where he was born and raised. You can reach Caleb at cwiegandt@ufl.edu.
@@CalebWiegandt
Previous Florida Gators Baseball takes series over No. 3 Ole Miss
Next Gators Rally, Clinch Spot at Nationals