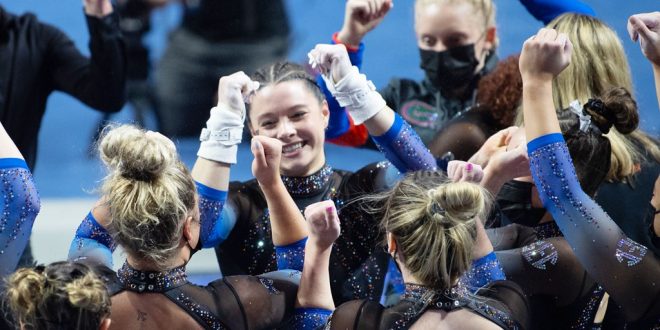 In a season full of tests, both on and off the competition floor, the No.1 Florida Gators had reached their final test before NCAA Nationals; the team had returned to form in the second round of regionals the day before, earning the top score of both its’ session and the day. Now, the top four teams from the Regional Semifinals returned to Stegeman Coliseum to secure a spot in Ft. Worth, Texas, for Nationals.

Minnesota, Denver and NC State were the Gators competition. In a thrilling meet that Florida trailed in at times, the Gators pulled out a victory, earning a spot at Nationals with a score of 197.700.

Last night, the Gators made their presence known early with an incredible beam lineup in the first rotation. They did not have as good fortune tonight; senior Jazmyn Foberg opened the lineup with a 9.775. Freshman Ellie Lazzari added a 9.825, but senior Megan Skaggs brought the team back to its’ familiar standard of success with a 9,900. Junior Savannah Schoenherr raised the bar higher, earning a 9.925 that would lead the Gators for the rotation.

Up next was junior Nya Reed, who appeared to suffer a minor injury in warmups that left her limping to the locker room before the meet began. Reed, after multiple attempts, fell on her landing and earned a 7.950; this meant that Foberg’s score of 9.775 would have to count. Baumann finished the rotation with a 9.800, and the Gators found themselves tied for last place. Memories of the SEC Championship were beginning to return; last time, the Gators fell apart and fell to third place. This time, Florida still had plenty of time to come back, only trailing the other three teams by .100 with three rotations to go.

“I think that my steps just got to me,” Reed said. “It was just a fluke thing. I’m not worried about the vault or anything like that, it’s just my steps.”

Bounce Back on Bars

“The pressure is always going to be there, it’s just about how you handle it.”-Junior Nya Reed

While Florida was unable to overcome a shaky lineup at the SEC Championships, the team showed resiliency in the second rotation. Competing on the bars, sophomore Payton Richards opened the lineup with a 9.800. The scores just went up from there; Lazzari posted a 9.875, and Skaggs remained the model of consistency with yet another 9.900.

“Jenny just got us up and going,” Baumann said. “She was like, ‘Lock it in, and let’s move on to bars,’ and we did a great job on bars. Then we just started building that momentum.”

Schoenherr followed Skaggs up with a 9.850; Thomas made her sole appearance of the night and scored a 9.9, just shy of her perfect 10.0 from last night. Freshman Gabrielle Gallentine anchored the lineup and put a cherry on top of the elite lineup with a 9.950. The Gators had their swagger back. Despite the rebound, Denver earned a 10.0 on the floor from senior Lynnzee Brown; the Gators still needed to gain more ground if they wanted to advance to Nationals.

“Before we came, she [Gallentine] was like ‘Jenny, I got this; I’m ready,'” Head Coach Jenny Rowland said. “For her to openly speak and say that out loud, it just meant the world to me and I know to herself.”

This beam performance from @MeganSkaggs_ helps launch the #Gators into first place as the team enters the final rotation. The beam has been bread and butter for @gatorsgym all year, and that continues tonight. @espngainesville pic.twitter.com/uoSsOQORgy

Up next for Florida was the beam, an event that the Gators excelled at on Friday. Richards stumbled on her performance, earning a 9.525; for the rest of the lineup, the pressure was on to make sure that score wouldn’t count against the team. Skaggs got things rolling with a 9.875, and Lazzari raised the bar to a 9.900. Baumann matched Lazzari’s score of 9.900, and junior Leah Clapper raised it even higher to a 9.950; this score gave her a share of the event title for the night. With Schoenherr rounding out the lineup with a 9.825, the Gators had officially come back. Entering the final rotation, Florida was the leading team, ahead of Denver by .75 and Minnesota by .175.

“That was not an easy meet,” Baumann said. “We really overcame a lot of stuff but that’s what we’ve been doing this whole season; we’ve been fighting through hard situations. This team knows how to handle it, and we did a great job tonight.”

Performing on the floor, Clapper opened the final rotation of the night for the Gators with a 9.850. Skaggs followed her with a 9.925, and Lazzari matched that score. Richards, who entered the lineup after junior Sydney Johnson-Scharpf was injured before the meet, earned a 9.650. As the event drew to a close, Reed had a chance to clinch the top spot of the night with a 9.950. After falling on the vault and being consoled by her teammates for the rest of the meet, Reed rose to the occasion; the junior from Landover, Maryland earned a 9.950 and put the meet on ice. The Gators were going to Nationals for the first time since 2018.

With the entire arena watching her routine, @nyreed_ delivers an incredible performance that locks up the #Gators spot at Nationals. It wasn’t always perfect for @GatorsGym , but they stay alive. @ESPNGainesville pic.twitter.com/2aoPtezL4F

“It’s been a really long journey, and really a two-year journey,” Rowland said. “These juniors and seniors have carried that on their shoulders for two years; we did not get to redeem ourselves last year because of the pandemic. However, they learned so much, and they grew so much. This team is stronger than ever.”

“I’ve been waiting for this for a long time.”-Senior Alyssa Baumann

Florida now has two weeks to perfect their routines before heading to Nationals. Beginning on April 16, the final competition of the year will feature the Gators; Minnesota, who finished in second tonight; and six other teams from the regionals around the country.

“This was the hardest part of the journey, and now it’s time to get back in the gym, and really make the most of what we have,” Rowland said. “This team is ready to go celebrate and have two great days at Nationals.”

Carson Cashion is a second-year student at the University of Florida, and has a major in journalism with a specialization in sports and media. Originally from the Orlando area, Cashion has covered the UF Gymnastics team as well as Oak Hall athletics for ESPN Gainesville.
Previous Stanford-Arizona In All Pac-12 Bout For National Championship
Next Gator Softball Cools Off; Falls to Georgia 4-2