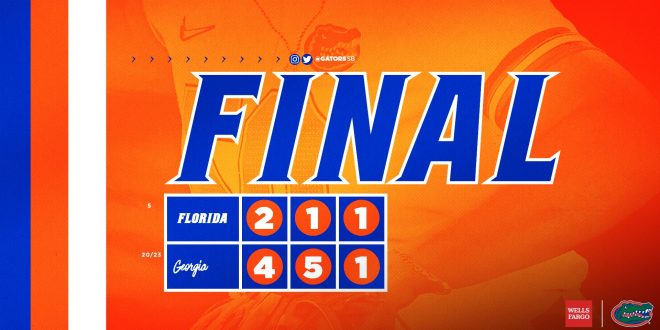 On a chilly Saturday night in Athens, Georgia, the fifth-ranked Florida softball was defeated by the 20th-ranked Georgia Bulldogs 4-2. Despite taking the lead early in the game, Gator pitching couldn’t hold on to the lead, and only one hit from the offense handed the team its fourth loss of the season.

Coming off a series sweep against LSU last weekend and a mid-week win against Jacksonville, the Gator offense looked to continue its dominance against SEC play. However, Bulldog pitching kept the Gator bats silent for most of the game.

The Gators were able to get on the board in the top of the second inning after Julia Cottrill reached on an error to set up Baylee Goddard with two outs in the inning. Goddard received an inside fastball on a 3-2 pitch, pulling the ball over the left-field fence and giving the Gators a 2-0 lead.

This was the only hit the Gators managed to get in the game. Hannah Adams’ 13 game hitting streak came to an end, going 0-for-2.

Mary Wilson Avant got the start in the circle for the Bulldogs. Although she gave up the home run in the second inning, she settled down and sat the Gators down easily for the rest of the game. Striking out six Gators, Avant pitched a complete game, pushing the Bulldogs record to 23-5 (4-3 SEC).

Giving up a one-out walk, Hightower attempted to go inside on Georgia’s Payden Bordeau. The pitch found the inside part of the plate, and Bordeau hit a line drive two-run home run to tie the game at two.

In the following inning, Hightower left a fastball over the plate for Sara Mosely, who crushed the ball over the left-field fence to give the Bulldogs a 3-2 lead with one out in the inning.

Georgia takes the lead via a solo home run to left field.

DUE UP: Goddard, Longley & Lindsey pic.twitter.com/yBm2epumDK

In the bottom of the fifth inning, Hightower got the first two Bulldogs out, but a two-out double and an RBI single allowed the Bulldogs to extend their lead to 4-2, ending Hightower’s night in the circle. Riley Trlicek came in to relieve Hightower, pitching the rest of the game without giving up any runs.

Although the Gators kept the Bulldogs off the scoreboard for the rest of the game, they couldn’t get the bats going. Hightower received only her second loss of the year and the loss dropped the Gators to 25-4 (8-2 SEC).

The Gators will continue their series against the Bulldogs on Sunday. Game two of the three-game series is set to begin at 3 pm.