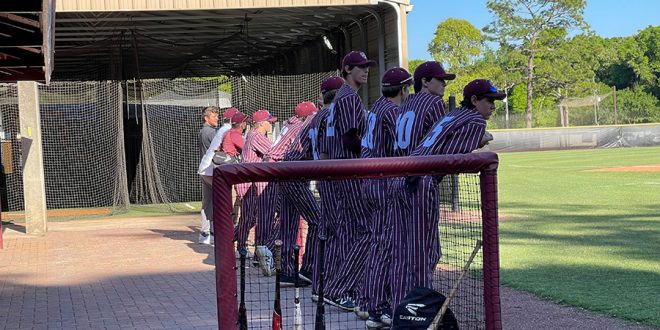 The Eagles set a fashion statement, showing up in pinstripe jerseys, referencing the famous Yankees jerseys.

At the top of the 6th inning, the Eagles remain consistent with a strong defense.

Oak Hall started off the game strong with another solid defensive performance. They were leading up until the top of the 6th inning when the P.K. Yonge Blue Waves scored four runs.

With a fast change of events in the 6th inning, P. K. Yonge have redeemed themselves.

In the top of the seventh inning, there were two walks and a double which yielded two runs.

On a passed ball, No. 40 Xander Sanetz scored, and No. 25 Jacob Pridgeon doubles on a line drive to center fielder No. 3 Neil Ruth, allowing No. 38 Thomas Shay to score.

When speaking with Coach Maris, he talked about star player No. 22 Levent Eldem’s pitching performance, “He’s getting better every outing, it’s the first time I let him go to 100 pitches.”

The next home game will be against the Hawthorne Hornets Wednesday, April 7 at 4:15 p.m.

Previous Gator Softball Cools Off; Falls to Georgia 4-2
Next Rays Take Opening Series; On to Boston