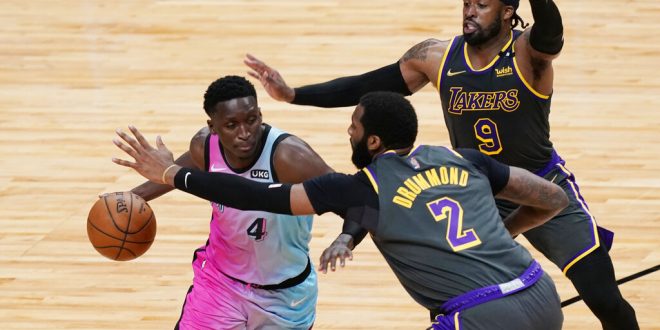 Oladipo Exits With Injury During Heat Victory Over Lakers

The Miami Heat defeated the injury-ridden Los Angeles Lakers 110-104 on Thursday night. Newly acquired guard Victor Oladipo exited the game in the 4th quarter due to an apparent knee injury.

Victor Oladipo went to the locker room following his landing after a dunk. pic.twitter.com/2ZPDgXB59e

Miami acquired Oladipo at the March 25th trade deadline. This transaction was a big splash for the Heat, despite his injury troubles in the past. The pickup seemed to serve as a test run for Oladipo and Miami before the guard’s free agency this offseason.

The injury could not have happened at a worse time for Oladipo — happening in his most impressive game with the Heat so far. He had 18 points, four rebounds and three steals on the night. Oladipo has an MRI scheduled for today.

“He was out there hoopin’. Hopefully, he’s more and more in a rhythm and he’s OK. We definitely need that guy. We want him back.” – Jimmy Butler

Along with Oladipo’s 18 points, Jimmy Butler scored 28 points en route to the win in the NBA Finals rematch. After draining his first four shots of the game, Butler continued his dominance from mid-range and in the paint all night long. He led all players with 10 points in the fourth quarter, including four free throws to help secure the win for Miami.

With solid performances from Tyler Herro and rookie Precious Achiuwa, the Heat were able to bounce back in this one after a tough loss to the Memphis Grizzlies earlier in the week. They improve to 27-25 on the season, and currently sit at 6th place in the Eastern Conference.

Miami is currently awaiting the debut of Dewayne Dedmon, who will be making his first NBA appearance since March 2020 with Atlanta. Even with this signing, Miami still has cap space to make another signing in their playoff push, especially if Oladipo’s injury is worse than the team is hoping.

The Heat will be starting a four-game road trip this Sunday, April 11th, against Portland. They will then visit Phoenix, Denver, and Minnesota before returning to Miami to host Brooklyn on Sunday, April 18th.