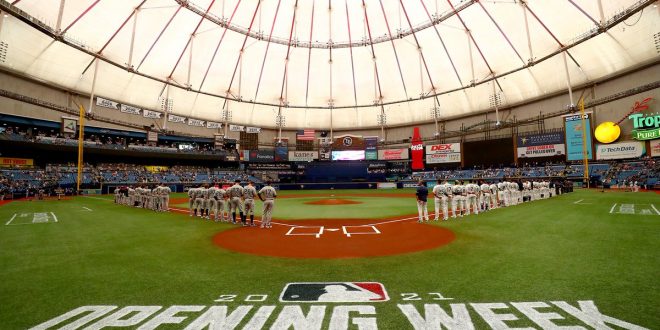 The Rays have their first home series of the season this weekend against the New York Yankees. Photo via: @RaysBaseball on Twitter

Rays set for battle with Yankees

The Tampa Bay Rays, fresh off getting swept by the Boston Red Sox, look to rebound this weekend as they host the New York Yankees in their first home series of the year.

Rays set for battle with Yankees

The Yankees are 3-3 on the young season but are coming off a series win against the Baltimore Orioles. Statistically, Aaron Judge paces the Bronx Bombers in a few categories. The slugger leads the team in both hits (eight) and batting average (.364). Second basemen D.J LeMathieu gets on base more than anyone on the New York roster, with an on-base percentage of .400.

Tampa, meanwhile, is 2-4 after the sweep by the Red Sox earlier this week and have now lost four straight. The Rays’ bats have let them down to start the season. Outfielders Manuel Margot and Randy Arozarena are the only batters with an average at or above .300, and they are both at exactly .300. As a team, Tampa is 20th in RBIs (22), 23rd in hits (42) and home runs (five) and 18th in on-base percentage (.294).

Neither team will have their ace available to them this weekend, meaning both Tampa and New York will have to go deep into their rotations. Corey Kluber takes the mound Friday for the Yankees, while the Rays trot out Rich Hill. Saturday, it will be a matchup between New York’s Domingo German and Tampa’s Chris Archer. Finally, game three will feature a battle of Jordan Montgomery from the Yankees and Michael Wacha from the Rays.

The Rays have a marathon of baseball ahead of them. Starting Friday, they will play 13 games without a break. After hosting New York, the Texas Rangers will come to town for a four-game series. Tampa will then travel to New York for a road series with the Yankees. From there, they will head west to Kansas City for a three-day bout with the Royals.

Game one of the series is set for 3 p.m. Friday, while both Saturday and Sunday’s games will be at 1:10 p.m.

Michael Hull is a sophomore at the University of Florida and is currently studying Journalism & Sports and Media.
@Michael_Hull33
Previous Oladipo Exits With Injury During Heat Victory Over Lakers
Next Florida Gators Women Basketball Adds Zipporah “Zippy” Broughton