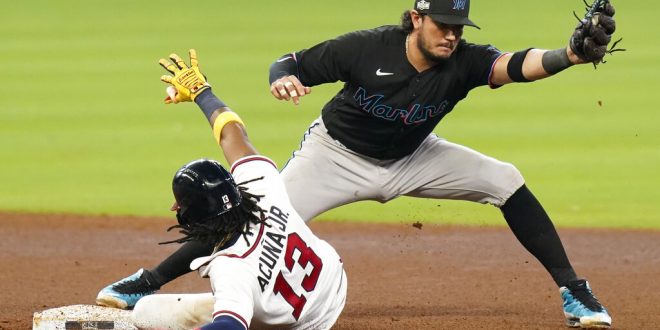 The Marlins piled up runs Tuesday night with a 14-8 win over the Braves. Miami ran up the scoreboard as the team had the bats cracking and earned 17 hits. The Marlins offense clicked on all cylinders as it won the second game of the NL east series with ease.

Mom said we have to go to bed now. We have another game to win tomorrow. #JuntosMiami // https://t.co/xUFYqNfQV0 pic.twitter.com/DlKWGaZiv3

Third baseman Brian Anderson rocketed a homerun at the top of the second inning that began the Marlins’ offensive mayhem.

Although the score was back and forth until the sixth inning, base hits began to pile up and Miami started to pull away as the team drove in runs left and right.

Bring Out The Brooms

The brooms are ready as the Marlins look to win a road series over the Braves. Miami has stolen two games so far this series and look to sweep Atlanta in their final matchup on the diamond.

With the Marlins’ two road victories in Atlanta thus far, the club has overtook the Braves as the third place team in the NL east. The Marlins now sit 1.5 games back behind the New York Mets and Philadelphia Phillies as the teams race for first place in the division.

Pitcher Nick Neidert will make his second career start and his sixth appearance on the mound this evening. In his one and only start this season, Neidert has a 2.08 ERA.

Catch the anticipated battle beginning at 7:10 p.m. between the Marlins and Braves as Miami continues to fight its way to the top of the NL east.

Angel is a student at the University of Florida. She is a Multimedia Journalist who is currently a Sports Reporter and Writer at ESPN Gainesville. Follow her on Twitter (@angelcwells) and Instagram (@angel_wells). Be sure to follow her NFL Twitter account to stay up to date with the latest NFL news. (@UpToDate1NFL)
@angelcwells
Previous Gators Softball Looks for Revenge Over UCF in Mid-Week Matchup
Next Lightning Fall to the Predators