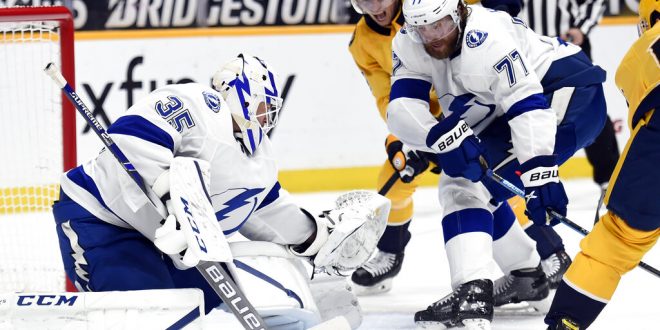 Ryan McDonagh called it one of the worst performances he’s been a part of since joining the Lightning.

Nashville stormed out with no mercy to a three-goal lead and never looked back. The Predators handed the Bolts a 7-2 defeat at Bridgestone Arena on Tuesday night.

"There was only one team playing [last night]. That was one of the worst performances I've seen us play."#TBLvsNSH | Ryan McDonagh: https://t.co/2lfNKjWwad pic.twitter.com/J4O3GrBtJ3

A goal from Colton Sessions just minutes before Roman Josi slapped on in gave the Predators a quick 2-0 lead before the halfway mark of the first period. As if a 2-0 lead wasn’t enough, late in the period  Viktor Arvidsson finished off a pass from Ryan Johansen to burry the Bolts. It was 3-0 at the end of the first.

Braydon Point brought the Bolts back within two with a power play early in the second period. Victor Headman collected the puck to fire a shot tat deflected off Point and into the Predators goal. The second period looked promising for Tampa Bay as play went on. They carried most of the momentum but could not convert that into goals.

Hope started to fade for the Bolts when Rocco Grimaldi scored with about eight minutes left to play in the period, restoring Nashville’s two-goal lead.

The Predators did not stop there. As if two goals wasn’t cushion enough, Arvidsson fed Johansen that was quickly fought off by McElhinney but unfortunately for the Bolts, Grimaldi was there to jump on the rebound. Predators then led 4-1.

The Bolts did not get much closer.

Arvidsson added another for the Predators midway through the third. Flying free on a breakaway and slapped a shot to the side and into the net. The Bolts answered with Yanni Gourde grabbing his own rebound and shooting it past Saros.

Nashville responded back with goals from Tanner Jeannot then Mikael Granlund.

Making it 6-2 for the predators and 1 career goal for Jeannot.

Tampa Bay finishes the regular season series 6-2-0 against the Predators.