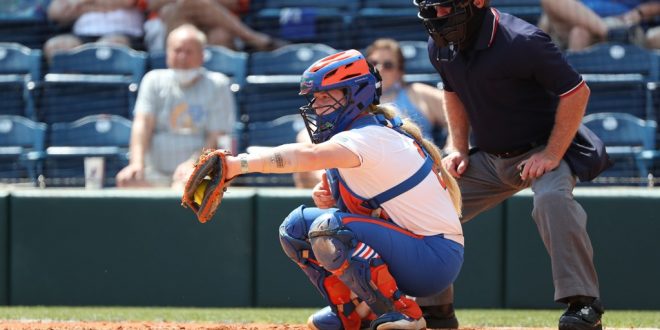 The fourth-ranked Gators softball team is back in action tonight, taking on the 23rd-ranked UCF Knights in a mid-week matchup. The Gators will look for revenge against the Knights, as the team suffered one of their four losses on the season to the Knights back on March 24.

The Knights stunned the Gators on a walk-off home run, handing Elizabeth Hightower one of her two losses on the season in the circle. Since the loss, the Gators have rebounded, winning nine of their last 10 games, with five of those wins coming against SEC opponents.

Since the tough loss to the Knights, the Gators have excelled at the plate in the last 10 games, hitting .311 (80-for-257). The team has crushed the ball off of opposing pitchers, slugging a total of 28 extra base hits with 15 home runs, 12 doubles, and one triple in that span.

Hannah Adams leads the Gators in batting average over the ten game span, hitting an impressive .452. Emily Wilkie is not far behind posting a .438 average. Adams and Wilkie are the only two players batting over .400, but three more Gators are batting over .300. Kendyl Lindaman, Cheyenne Lindsey, and Julia Cottrill are the three Gators batting over .300, posting a .360, .344, and .310 average, respectively.

Cheyenne Lindsey is batting .296 over the last ten games, but has tore up the plate over the last five games. Lindsey has batted .462, hitting five home runs with 13 RBIs for the scorching Gator offense.

Additionally, Gators pitching has also been impressive over the 10-game span, holding a 1.70 ERA in 66 innings pitched, keeping opposing batters to a low .187 batting average.

The Knights come into the mid-week matchup with a 9-3 record over their last 12 games, hitting .278 (93-335) as a team with 14 doubles and 12 home runs. The UCF pitching staff has also been impressive during this slate, having a 2.10 ERA, holding opposing hitters to a .234 batting average over 86.1 innings pitched. The Knights have won four straight games, sweeping Eastern Carolina in a four game series, including back-to-back shutout victories.

After the Gators’ mid-week duel with the Knights, the team will face their toughest opponent of the year in a massive series against the third ranked Alabama Crimson Tide. The Gators will travel to Tuscaloosa for a top five matchup, with a three game series starting Friday. Game one of the series is set to begin at 7 p.m.