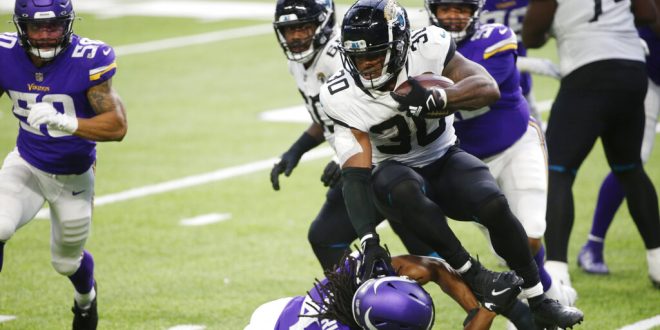 Jacksonville Jaguars running back James Robinson (30) is tackled by Minnesota Vikings safety Anthony Harris (41) during the second half of an NFL football game, Sunday, Dec. 6, 2020, in Minneapolis. (AP Photo/Bruce Kluckhohn)

But he will most likely lead rookie quarterback live up to his lofty expectations. Jacksonville has all but confirmed who it’ll take with the No. 1 pick in the NFL Draft on April 29 — former Clemson star Trevor Lawrence.

Former Gators signal caller Schottenheimer sat down with Steve Russell to discuss the Jaguars on the April 15 episode of Sportscene.

Schottenheimer isn’t a stranger to the Sunshine State. He played quarterback for Florida from 1994-1996 behind legendary Gators gunslinger Danny Wuerffel.

Just like his father Marty Schottenheimer and other former backup quarterbacks, he moved into a coaching role. His father ranks eighth in most wins all-time in the NFL.

However, Schottenheimer’s original dream was to play on Sundays. He said he realized during his first two years on campus that he wasn’t talented enough to make it to the next level.

But he considered himself fortunate because he had a “backstage pass” to learn from one of the best coaches in college football history, Steve Spurrier. This inspired him to pursue coaching.

“If I wasn’t good enough to play on Sundays or at the next level, I wanted to take my knowledge and my ability to help others with more talent than me be successful,” he said. “It really started on my journey through Gainesville and helped me get back into the NFL as a coach.”

One of his biggest takeaways from Spurrier was learning about personnel matchups, which is an important tool for offenses in the NFL.

“It always fun for me to come into the meeting on Monday and to see where he was going to put Ike Hilliard, Reidel Anthony, Jacquez Green and get Fred Taylor and Eric Rhett involved in the running game,” he said. “That was really fun for me as a young, fun and inspiring mind of football to see how Steve moved all those pieces around.”

It’s hard to have any conversation with any Jaguars fan, coach or player without discussing Lawrence, the presumptive No. 1 overall pick in the 2021 NFL Draft.

Schottenheimer said Jacksonville has “great feelings about him,” and would be excited to coach the young prospect.

But one of the most significant challenges he has had to overcome is the evolution of offenses since he entered the NFL in 1997 as an assistant for the Rams. The system he ran back then was the typical pro-formation where the quarterback played under center and had a running back line up five yards behind him. Then they ran the ball more than they threw it.

Quarterbacks like Patrick Mahomes, Lamar Jackson and Russell Wilson have entered the league have forced teams to adapt to a more spread-like offense.

He also looks forward to teaming up with former Florida coach Urban Meyer. Schottenheimer has been most impressed with his ability to recognize what he needs help with. Like the things, he doesn’t understand about the NFL. He believes that’s a trait of a strong leader.

Schottenheimer and the Jaguars are anxious to finally get the NFL Draft started on April 29. They hope to use the first pick to select the new face of the franchise.

Zachary Huber is a senior journalism student specializing in sports media at the University of Florida from Jacksonville, Florida. He works at The Alligator, covering gymnastics and volleyball while working at ESPN Gainesville. Follow him on Twitter @zacharyahuber.
@@zacharyahuber
Previous Gators Lacrosse Are AAC Champs Again
Next NFL Players are Opting Out of Voluntary Workouts