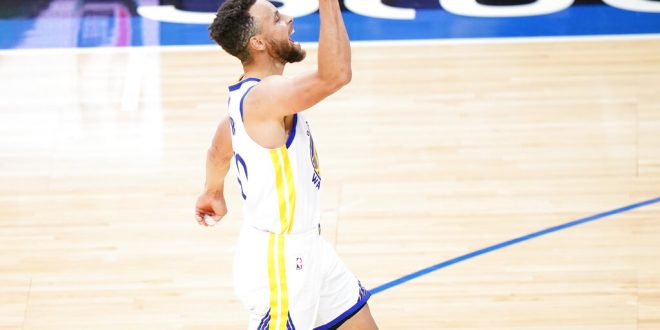 Steph Curry has been playing at a historically great level during the past month of NBA action.

The Golden State Warrior star has averaged 40.8 points, 6.6 rebounds and 4.3 assists over 10 games of action in April. Curry has also shot over 50% from three-point range while averaging over 14 attempts a night from beyond the arch.

Sitting one game out of the Western Conference’s eighth seed, Curry has recently turned up the intensity. The Warriors have won six of their last eight contests to reach a .500 record on the season. (29-29) In those matchups, the former MVP has played some of his best basketball of the season. Against Denver, Boston and Philadelphia (three of the league’s hottest and best teams) Curry has dropped 53, 47 and 49, respectively.

It’s been one record after another for the star point guard this season. Just last week, Curry became the Golden State Warrior’s all-time leading scorer, passing Wilt Chamberlain’s 17,783 points scored for the franchise.

Now, his record-breaking play is on a league-wide level. In his 49-point-performance against the 76ers last night, Steph passed Kobe Bryant and Michael Jordan for the most 40-point scoring outings in a month age-33 or older.

Monday night’s outing also marked Curry’s eleventh straight game with 30+ points putting him pasts the likes of Rick Barry, Jerry West and Kobe Bryant. His 11 is now tied with Shaquille O’Neal and Michael Jordan. Now, he will be looking to tie former teammate Kevin Durant with 12. Curry shrugged off questions about the achievement on Monday night.

Stephen Curry finished with 49 pts tonight in a win vs the 76ers. It was his 5th 40-point game in April.

That passes Kobe Bryant and Michael Jordan for most 40-pt games in a month by a player age-33 or older. pic.twitter.com/JhnrKr24n1

A large part of this high-octane scoring output has been his other-worldly success from behind the arc. Injured teammate Klay Thompson currently sits in second place for the most games with 10+ three-pointers made with 5. Curry has raced past all competition with 6 this year and 16 over his career.

Steph Curry has 6 games with 10+ threes THIS SEASON.

No other player has more than 5 in THEIR CAREER. pic.twitter.com/2FGIziycC5

Curry’s recent scoring explosion has put the two-time league MVP in a position to capture his second scoring title. He currently averages 31.4 points per game putting him ahead of other league leaders Bradley Beal (31.1 ppg) and Damian Lillard (28.7).

A second scoring title for Steph would put him among the likes of NBA legends such as Kareem-Abdul Jabbar, Tracy McGrady, Kobe Bryant and Shaquille O’Neal.

By: Benjamin McLeish and Dylan Olive After a tight loss at home to Williston on …