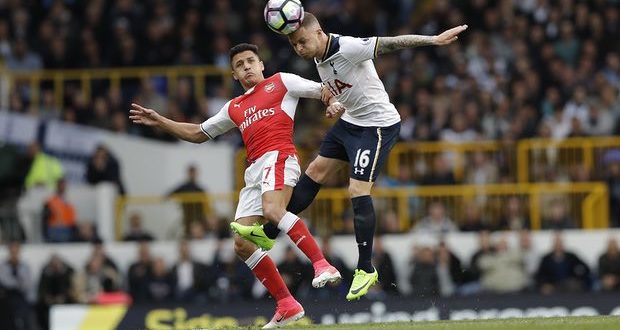 Trippier beats Sanchez to the ball. Image from https://www.theguardian.com/football/live/2017/apr/30/tottenham-hotspur-v-arsenal-premier-league-live?page=with:block-590613d2e4b06585062d8e44#liveblog-navigation

On Sunday, the formation of the European Super League was announced, but by Tuesday night, the league was suspended.

Soon after the announcement of the European Super League, fans, players, coaches and the media all had something to say. However, a majority of the comments were not in favor of the new league. Within just two days of the announcement, complete chaos ensued.

During Liverpool’s match on Monday, fans gathered outside of the stadium to protest loudly. Additionally, on Tuesday, Chelsea fans blocked traffic outside of Stamford Bridge, blocking the club’s bus. Club members also spoke out against the new league formation on social media. Players from Manchester United and Liverpool were among those who spoke out.

Due to the public outcry surrounding the new league, many of the founders pulled out within two days. Manchester City became the first club to pull back from the league. The organization released an apology to the fans for their decision to join the league at all. Other Premier League clubs followed suit.

Arsenal, Liverpool, Chelsea, Manchester United and Tottenham Hotspur all released plans to pull back from the league on Tuesday. The clubs also issued out apologies to their fans and supporters.

With six of the founder clubs pulling out of the league within two days of its formation, things don’t look great for the European Super League. Following an emergency meeting on Tuesday, the Super League announced the suspension of the project. The project will need to recruit more founders after the tough loss of the six clubs. The Super League will also likely need to figure out how to make peace with the public.