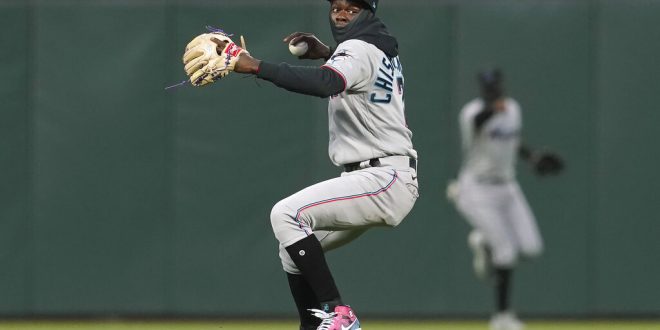 Miami Marlins second baseman Jazz Chisholm Jr. throws to first base for the out after fielding a grounder by San Francisco Giants' Mike Yastrzemski during the third inning of a baseball game in San Francisco, Thursday, April 22, 2021. (AP Photo/Jeff Chiu)

The Miami Marlins fell to the San Francisco Giants in game one of their four-game series on Thursday night.

The Giants started with a 3-0 early lead in the bottom of the first inning.

Darin Ruf hit a double that brought in runner Mike Yastrzemski for the first run of the night. Then Curt Casali hit a two-run single to the left side of the infield to bring in the last two runs of the night to make the score 3-0.

Giants pitcher Aaron Sanchez was able to have five scoreless innings before 21-year-old Gregory Santos made his MLB debut in the top of the sixth inning. Santos was the youngest Giants pitcher to make a debut since Madison Bumgarner in 2009.

He topped out at 98.9 mph and threw a slider that led to three outs in his 16 pitch outing. Matt Wisler, Tyler Rogers and Jake McGee closed out the game to record the team’s fifth shutout of the season.

Casali is filling in for resting catcher Buster Posey. He became the fifth catcher since 2015 to backstop a shutout in five straight starts with five different starting pitchers.

Curt Casali has now caught a shutout in each of his last 5 starts for the @SFGiants.

He's the 5th catcher in modern MLB history (since 1900) to catch a shutout in 5 or more consecutive starts, and the first to do it with 5 different starting pitchers (h/t @EliasSports). pic.twitter.com/9yCIgZvxVF

The Marlins came into this series with a recent win over the Baltimore Orioles Wednesday night. They were unable to secure a win last night against the Giants bringing their record to 8-10 this season.

Miami is not at full strength in their roster lineup as they are missing three starting position players and two rotation players due to injuries.

Marlins left-hander Daniel Castano struck out two over five innings in their loss to the Giants. Castano entered his start with a career rate of 3.1 strikeouts per nine innings. Zach Pop and John Curtiss finished out the first game of the series.

Miami will look to bounce back and tie the series with a win tonight.

The Marlins and Giants will play game two in the series tonight at Oracle park, starting at 9:45 p.m.

Right-handed pitcher Sandy Alcantara will take the mound for the Marlins, and left-handed pitcher Alex Wood will start for the Giants. Wood beat Miami last week in his first game since he underwent an ablation procedure in his lower back for March 16.