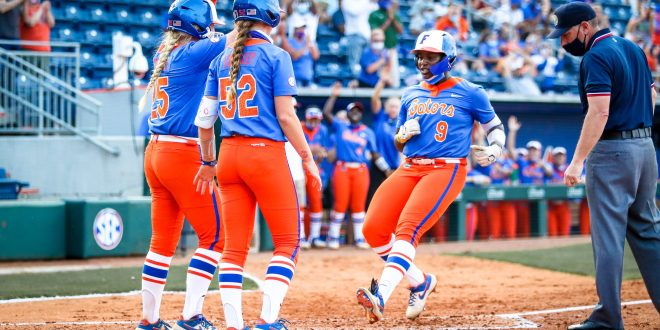 Jaimie Hoover touches home after her third home run of the season. Her two-run blast on senior night propelled the Gators to a win against South Carolina. (Photo Credit: @GatorsSB / Twitter)

On a night celebrating the seniors on the Gators Softball team, it was the upper classmen who made the difference. Senior Jaimie Hoover and Junior Hannah Adams provided early home runs to propel the Gators to victory. The Gators won 6-0 over South Carolina on Saturday night to improve to 34-7 (13-4, SEC).

Additionally, the Gators bounced back from a Friday night defeat to level their series against South Carolina.

After struggling to take advantage of opportunities on offense on Friday, the Gators struck early on Saturday. In fact, they struck about as early as they could.

Hannah Adams received recognition recently for being a Finalist for USA Softball Collegiate Player of the Year. She lived up to that potential just three pitches into the home side of the first inning. Adams launched a ball out of the stadium in right-center field. The Gators picked up an early 1-0 lead on Adams’s sixth dinger of the season.

This lone run would go on to be the difference in the game. Gators Softball Head Coach Tim Walton says this home run gave the entire team a boost in confidence that helped in their victory.

“When we’ve got leads and we score first, we win,” Walton said in his postgame press conference. “I think a lot of that has to do with confidence.”

Flash forward to the second inning, Hoover raised Adams. With Julia Cottrill reaching on a single two batters prior, the senior punched a ball over the fence in left field. Hoover’s third blast of the season put the Gators up three early.

Florida added another run in the second when an error on a Hannah Adams ground ball allowed Sarah Longley with two outs.

Shutting the Game Down

While the Gators’ bats would calm down after the second inning, starting pitcher Natalie Lugo heated up. The Gamecocks managed two hits in the first inning with no outs, but Lugo found her groove.

Lugo prevented the Gamecocks from finding any rhythm on base. South Carolina went 0-6 with runners in scoring position, with three of those outs coming in the top of the first. Furthermore, the senior struck out five and forced simple outs throughout.

Offensively, Charla Echols continued her great form to provide Lugo some more insurance. Just as Hoover did in the second, Charla Echols thumped a two-run home run, this time to center field.

The junior’s 11th homer on the season put the Gators up 6-0 in the fifth inning, a score they would see out to the end of the game.

To close out the game with this expanded lead, Lugo picked up outs on her last nine batters faced. This includes back-to-back 1-2-3 innings in the sixth and seventh innings to stifle any attempt at a comeback.

After the game, Jaimie Hoover spoke about the difference between Friday’s loss and Saturday’s win.

She said this team is full of fighters, and that is why they battled hard following Friday’s loss.

“Our team has a lot of fight,” Hoover said postgame. “Today’s goal was just to fight and to work with each other and learn from yesterday.”

Coming off a series win in Tuscaloosa against No. 3 Alabama, Friday’s loss served as a wake-up call.

Florida, which is five-for-five in SEC series this season, will look to go six-for-six tomorrow.

First pitch in the series finale between the Gators and Gamecocks is set for 1 p.m. tomorrow.

Originally from Seminole in the Tampa Bay area, Kyle is a contributor for ESPN Gainesville as well as local NPR and PBS affiliate WUFT. Kyle wants to get into sports with a lofty dream of being a sports broadcaster. He was raised playing soccer and baseball while watching hockey and football, so the knowledge about various sports is fairly extensive.
@KyleFanslerUF
Previous Gators Baseball Beats Auburn to Extend Winning Streak
Next Auburn Takes Game 2, 10-8