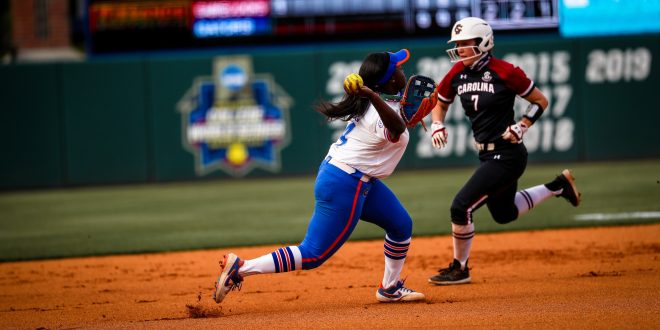 In the top of the sixth inning, South Carolina Gamecocks second baseman Kenzi Maguire roped a double to center field to lead off the inning. The double ended Gators starting pitcher Elizabeth Hightower’s night in the circle, as Katie Chronister came in relief, hoping to strand the runner on second base.

However, Gamecocks first baseman Mackenzie Boesel came up to the plate and hit a chopper up the middle off Chronister, but Gators centerfielder Cheyenne Lindsey fielded the ball quickly and rifled a throw home. Gators catcher Julia Cottrill bobbled the ball when she received it, but she reached out to try and tag Maguire attempting to avoid the tag. The home plate umpire waved his arm signaling the runner was safe, giving South Carolina a 2-1 lead. Although the rowdy home crowd didn’t agree with the call, Cottrill barely missed the tag, allowing the Gamecocks to ultimately defeat the Gators 2-1 in the opening game of a three-game series.

The full line in Gainesville as we head to the seventh inning. ⤵️ pic.twitter.com/8lrz1x6qjs

The Gators never backed down in the bottom of the seventh inning, as the team was able to put runners in scoring position to tie the game.

Julia Cottrill led off the inning with a single up the middle, and pinch-hitter Emily Wilkie sacrificed pinch-runner Katie Kistler to second base. Avery Goelz was next up to the plate, grounding out to first base, but advancing Kistler to third base with two outs in the bottom of the seventh.

Jordan Matthews was walked on four pitches in the next at-bat, bringing up Jaimie Hoover with a chance to tie the game for the Gators.  Hoover was able to draw the count to 2-2, before popping out to the second baseman in foul territory, ending the game.

A Pitching Duel for Both Teams

Hightower pitched another strong game in the circle. She ran into trouble in the first inning, giving up three singles. After giving up a run with one out, Hightower was able to battle back and get a 5-4-3 double play to end the inning.

Despite the trouble in the first inning, she settled down, retiring ten straight Gamecocks starting in the top of the third until the top of the sixth. Hightower’s final line was five innings pitched, giving up two earned runs with one strikeout.

Leah Powell started in the circle for South Carolina. Despite struggling with command in the first inning and giving up a rbi double to Kendyl Lindaman, she settled down and kept the Gators bats quiet until the bottom of the seventh. Powell’s final stat line read seven innings pitched, giving up four hits, one earned run and striking out four Gators.

“Later in the game, she was able to locate her changeup a lot better,” head coach Tim Walton said talking about Gamecocks pitcher Leah Powell. “We obviously had a couple of opportunities and didn’t take very good advantage of it. When we did have count leverage, we did nothing with it.”

The Gators will honor four seniors before the second game of the series against South Carolina. Jaimie Hoover, Kendyl Lindaman, Katie Chronister, and Jordan Matthews will be honored before first pitch. Game two is set to begin at 6 pm.

“This senior class has done a really good job,” Walton said.  “What they’ve gone through is just figuring out how to do things a little bit differently and still keep your honor and your character intact and I think our players have done a good job with that. I’m proud of them.”