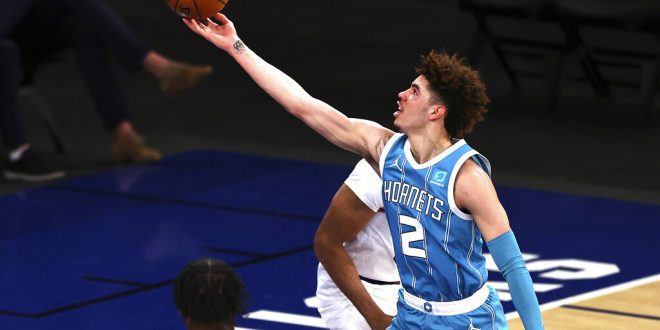 Charlotte Hornets' LaMelo Ball heads to the basket in the second quarter of an NBA basketball game against the sNew York Knicks at Madison Square Garden, Saturday, May 15, 2021, in New York. (Elsa/Pool Photo via AP)

Charlotte and Indiana battle in the Play-In Tournament

The Charlotte Hornets will travel to Indiana for the first game of the brand new NBA Play-In Tournament against the Pacers. The Hornets are the 10 seed and will be playing the nine seeded Pacers.

How the Play-In Tournament works

The Play-In Tournament will consist of four teams in each conference. The the two teams that are in the seven vs eight seed game will have the best chance to advance. All the seven or eight seed has to do is win one game to advance into the playoffs.

In the case of Indiana and Charlotte, they will need to win tonight then beat a seven or eight seeded team twice to advance. The loser of tonight’s game will enter the draft lottery, while the winner will face the loser of the seven and eight game.

The Wizard are the eight seed and they are playing the seven seed Celtics in Boston tonight.

Banged up Pacers try to advance

The Pacers will be without four players tonight due to injury. Leading scorer Malcom Brogdon is among the players out. He averaged 21.2 points per game this season. Edmond Sumner, Aaron Holiday, and Caris LeVert. Also, Domantas Sabonis is listed as day-to-day so we will see what that means for him tonight.

Also, the Hornets have a key injury for tonight too. Gordon Hayward is listed as out tonight.

The Hornets come into this Play-In game on a five game losing streak. The Hornets are just 3-9 in their last 12 games and two of their three wins game against the Detroit Pistons, while the other win came from Orlando.

Charlotte has won the season series over Indiana 2-1, so it will be interesting to see if that has any impact on who comes out on top in this one game sample.

Charlotte and Indiana are about as even as it gets

The Pacers and the Hornets are two very similar teams. They are separated by just one game in the standings and the ESPN BPI matchup predictor has the Hornets at a 50.1 percent chance to win.

Furthermore, this should be a very close game tonight with the teams being so similar. The Hornets’ head coach James Borrego is thinking the same thing.