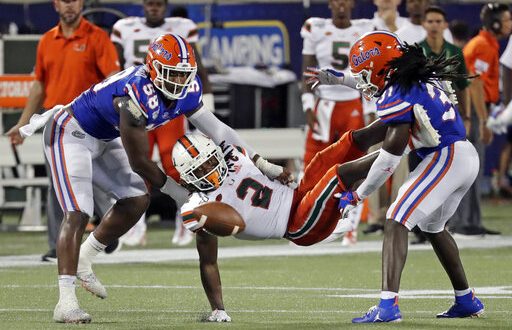 Miami wide receiver K.J. Osborn, center, fumbles the ball as he is hit by Florida linebacker Jonathan Greenard, left, and defensive back Shawn Davis during the second half of an NCAA college football game, Saturday, Aug. 24, 2019, in Orlando, Fla. (AP Photo/John Raoux)

In a league that already boasts many former Gators, defensive back Shawn Davis looks to be the next star to make his mark in the NFL.

A two-year starter, Davis racked up 123 tackles and five interceptions during his time at Florida. His best season came in 2019, where he had 51 tackles and three interceptions. In 2020, he had an inconsistent year, along with the rest of the Gator defense. After a targeting ejection in the first game against Ole Miss and time spent on the COVID-19 list, Davis had 40 tackles and two interceptions but was plagued with many missed tackles. However, after a decent showing in the 2021 Reese’s Senior Bowl, the Colts took a chance on the six-foot, 200-pound safety.

The Colts drafted Davis in the fifth round at pick 165.

“I never knew I would end up in Indy, but it’s a dream come true,” Davis said. “I’m just ready to go and ball.”

Shawn Davis as a safety

A hard-hitting safety, Shawn Davis is a versatile option for the Colts in the secondary. With the ability to play both safety spots and many coverages, Davis describes the Colts as the perfect destination for him.

“We play a lot of quarters, a lot of trap coverages, and a lot of Cover-2,” Davis said about his time at UF. The Colts are known for a Cover-2 defense, where Davis has ” a lot of great experiences.”

As far as his position is concerned, Davis said, “I just call myself a safety,” due to his ability to play both spots.

The upside of Davis is extremely high, too. He brings to Indianapolis an exciting playmaking ability, as seen in this highlight from the 2019 Auburn game:

The biggest part of his game is his physicality. At 6-feet, 200 pounds, Davis lacks the size to be the best coverage safety. However, he makes up for it with hard hits on receivers and backs.

“If you’re not physical, then it’s all touchdowns coming from the backend on your part. So, I made being physical a part of my game and one of my physical strengths.”

Within the Colts system, Davis is expected to be in a backup role and a contributor on special teams.

After finishing the 2020 season 11-5 and in second place in the AFC South, the Colts lost to the Bills 27-24 in the Wild Card Round. They also made many off-season roster moves to improve their team. In April, they traded for quarterback Carson Wentz. They also re-signed wide receiver T.Y. Hilton and signed free-agent offensive lineman Eric Fisher. Finally, they drafted defensive end, Kwity Paye, in the first round of the NFL Draft.

The Colts open up the 2021 season at home against the Seattle Seahawks.