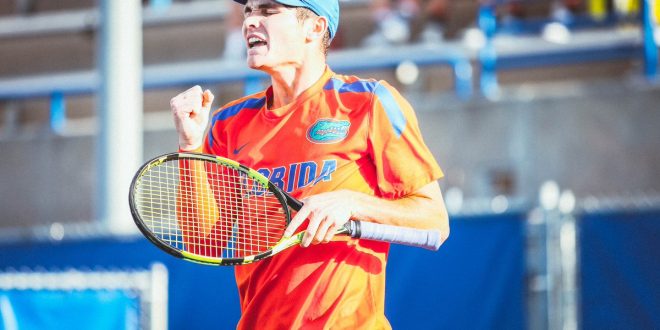 Florida Tennis: Riffice advances to Quarterfinal, Kessler/Zein take Round of 16

Members of Florida Gators men’s and women’s tennis teams continued postseason play of Tuesday afternoon. The duo of McCartney Kessler and Marlee Zein advanced to the NCAA Doubles Tournament round of 16.

Furthermore, Sam Riffice took the round of 16 as the only men’s player left standing in the NCAA Singles Tournament. The junior secured a spot in the quarterfinals with a two set victory over his Illinois opponent on Tuesday afternoon.

Additionally, the Gators advanced two doubles teams to the NCAA tournament. Riffice and Vale along with Will Grant and Johannes Ingildsen appeared in the first round. However, both pairs fell to their opponents in two sets.

Riffice locked in his spot in the round of 16 in the 2021 NCAA Singles Championship after a comeback victory over Andres Martin of Georgia Tech. The junior dropped the first set 2-6 but managed to claim the next two 6-2 and 6-0.

Up next for Riffice is a quarterfinals meeting with either Val Vacherot of Texas A&M and Rinky Hijikata of North Carolina. Furthermore, Vacherot and Hijikata will compete on Tuesday afternoon at 1:30. The winner advance to the quarterfinal against Riffice.

Florida Women’s Tennis in the Doubles

Florida women’s tennis doubles team of Kessler and Zein take the round of 16 of the NCAA Doubles Championship. The duo defeated Louisville’s Raven Neely and Tatiana Simova in two sets in the round of 32.

Kessler and Zein took the first set 6-1 followed by a set two 6-3 victory.

After winning the 2021 NCAA Championships, the Gators men’s tennis team are coming in hot …