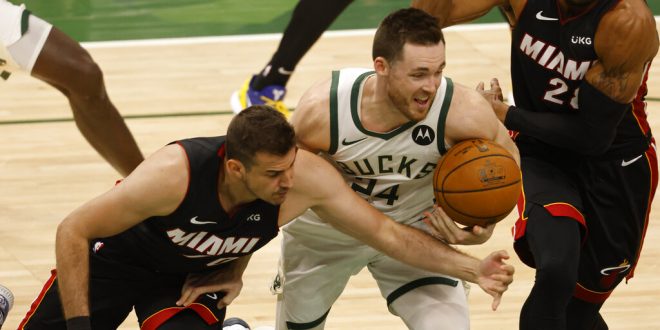 Milwaukee Bucks guard Pat Connaughton (24), center, fights for the ball against Miami Heat forwards Nemanja Bjelica (70) and Andre Iguodala (28) during the second half of Game 2 of an NBA basketball first-round playoff series Monday, May 24, 2021, in Milwaukee. (AP Photo/Jeffrey Phelps)

Heat look to get back on track in game 3

After falling behind 2-0, the Miami Heat host the Milwaukee Bucks in game three of the Eastern Conference Playoffs tonight at 7:30. With game four potentially being an elimination game, the Heat find themselves in desperate need of a win.

The First Round series moves to Miami for games three and four, and the Heat look to bounce back with home court advantage. This week, the Heat announced they were increasing capacity to 17 thousand, which will be the most fans that they have had in over a year.

Heat guard Jimmy Butler, who leads the team in points and assists with 21.5 points per game and 7.1 assists per game, also looks to improve on his previous performances. So far, Butler is 8-32 shooting through two games.

In game one, the Bucks overcame the visiting Heat behind Khris Middleton’s 27 points and Giannis Antetokounmpo’s impressive 26 points and 18 rebounds. With 0.5 seconds left in overtime, Middleton hit a jump-shot to push the Bucks to a 109-107 victory. On the other side, Miami’s Goran Dragic led the Heat with 25 points off the bench. Duncan Robinson added 24 points. Jimmy Butler had a double-double with 17 points and 10 rebounds, but was only 4-22 shooting.

27 points for @Khris22m in Game 1, including the GAME-WINNER with 0.5 remaining in OT! #FearTheDeer

In game two, the Bucks completely dominated the defending Eastern Conference champions with a 132-98 victory, thus taking a 2-0 series lead. Antetokounmpo led all scorers with 31 points and added 13 rebounds. Miami’s Dewayne Dedmon led the Heat with 19 points off the bench. The big surprise was Bucks’ guard Bryn Forbes, who had 22 points off the bench with six three-pointers.

Game three starts tonight at 7:30 with game four taking place on Saturday. Miami hosts both games. With a loss, the Heat face elimination down 3-0. With a win, the Heat find themselves in a better position by forcing game five in Milwaukee.

In the Western Conference, the seventh-seed Lakers host the second-seed Suns in game three. Tipoff is at 10 p.m. The series is tied 1-1.

At 10:30 p.m., the third-seed Nuggets travel to Portland to take on the sixth-seed Trailblazers. The series is also tied 1-1.