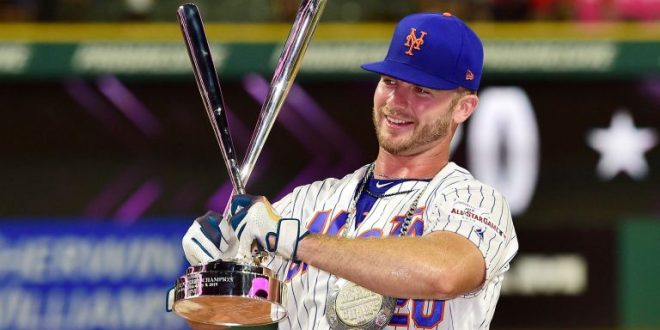 Ball were flying at Coors Field on Monday night, and Pete Alonso led the charge. The former Gator and Mets first baseman bashed his way to his second-straight Home Run Derby title.

Alonso described winning back-to-back titles as special, especially since he grew up loving it.

He edged out fellow first baseman Trey Mancini 23 home runs to 22 in the final to win the prize. What is this prize, you ask? Only a trophy, a massive spinning key chain and $1 million. Alonso made more money this year winning the derby than he’ll make off his salary this year. And that was true in both victories.

Given that his arbitration years start after this season, this will probably be the final year this can happen. Whether this will impact his decision to participate in future home run derbies is something we’ll find out in the future.

Round One: Salvador Perez

Alonso’s first opponent was Royals catcher Salvador Perez. Getting to bat first, he left Perez with no chance, belting 35 home runs. Perez reached 27 home runs, which would have sent him to the next round against anyone else.

Juan Soto did hit 31 home runs in the first round, but that way after a 60-second tie breaker plus the swing off to beat Shohei Ohtani (28).

This time around, Alonso has to wait to hit. But to Soto’s misfortune, he’s giving his opponent a reference point–and Soto only hit 15 home runs. Alonso, metaphorically, waltzed his way into the final round.

Just need to say this quickly. Hats off to Trey Mancini. He’s beaten cancer, is having a great season and made it to the final round of the Home Run Derby. He even gave Alonso a run for his money. After a slow start in the round, Mancini caught fire in the final minute and bonus time to reach 22 home runs. Alonso ended up winning, but he was the toughest opponent of the night.

Alonso had nothing but praise for his final opponent.

All-Star festivities continues with the MLB All-Star game. Neither Mancini nor Alonso will be in the game. But, they made their times in Denver count.

Harrison is a sports coordinator at ESPN 98.1 FM/850 AM WRUF. He served as a beat writer for Florida Gators football for the 2019 and 2020 seasons. He also contributes to WRUF's Gainesville Sports Center segments and makes appearances on the Clash on Harp on Sports. Harrison has been a content writer for WRUF since January 2019 as well.
@HarrisonSmaj
Previous Angels Ohtani looks make history during All-Star break
Next Seven Gators Picked in Day 2 of MLB Draft