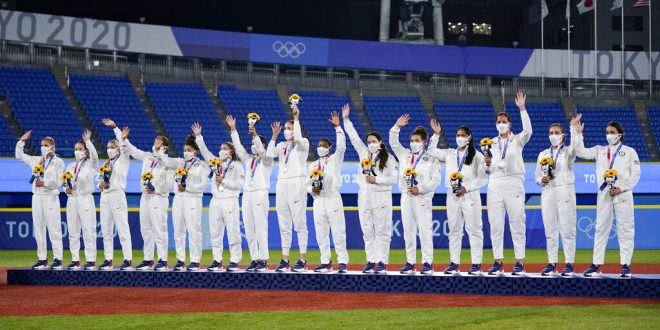 Silver medalist team United States celebrate on the podium during the medal ceremony for softball at the at the 2020 Summer Olympics, Tuesday, July 27, 2021, in Yokohama, Japan. (AP Photo/Sue Ogrocki)

The 2021 Tokyo Olympics have been nothing but kind to the USA Olympic teams. The United States currently leads all countries in total medals with 25 as of Tuesday afternoon. The USA currently sits in second place for total Gold Medals with nine, one behind Japan’s ten. Leading in both bronze and silver medals, the USA looks to take the lead in Gold Medals, and hold the overall majority of Olympic medals.

On Sunday, former Gator, Kelsey Stewart, sent the USA Women’s Softball Team to a Gold Medal Game with her walk-off. After defeating Japan, the USA Softball team quickly realized their Gold Medal Game would be a rematch of the hard fought game on Sunday. However, the USA fell short in this rematch. Japan’s flawless combination of powerful hitting and fierce pitching was no match for the US. Falling 2-0, the USA earned the Silver Medal in Softball as Japan came away with the Gold.

One of the biggest storylines of the Olympics so far has been the self-removal of Simone Biles. Biles was originally reported to have pulled out of the games due to a medical issue. Biles has since come out to state that she is taking a step back from the games for mental health. As Biles took herself out after the first apparatus of the night. Biles also received an alarmingly low score for her caliber of talent. Due to this, the USA got the Silver Medal in all-around team competition as Russia came away with the Gold. Biles is still scheduled to defend her individual all-around title on Thursday, July 29.

With the USA already leading in the overall medal count, it is interesting to see how the country finishes. With sports like baseball and basketball still to be completed, the world will have their eyes on the USA Olympic teams.