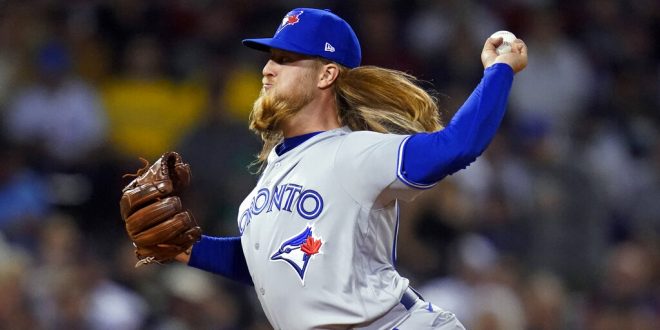 Normally, we’d say to save the Nintendo jokes for another time. However, the Toronto Blue Jays have fully embraced them, so it’s all fair game.

Former Gators pitcher Kirby Snead got the call from the Blue Jays to head north for his debut. Well, he’ll head north with the team this weekend when they return to Toronto, but his first stop was actually Boston. When Snead joined the Sport Scene with Steve Russel, he was asked what his first thoughts were. There was excitement and wondering what he would do with all his stuff.

Snead’s call to the bullpen came during the fifth inning of Wednesday’s against the Red Sox. The Blue Jays already trailed 4-1 and needed to limit the damage. Snead’s first assignment was to deal with a jam. Blue Jays pitcher Patrick Murphy allowed Boston two leadoff batters to reach base then picked up a strikeout. With a 1-1 count, Snead got Red Sox centerfielder to ground into a double play to end the fifth. The Blue Jays weren’t able to overcome Boston’s early lead, but he got the job done immediately.

Snead said on the Sport Scene he wasn’t sure how long he’d be with the Jays. But he said he’s ready for what the team needs him to do.

Snead is a native of the Gainesville area and attended Santa Fe High School up in Alachua. He committed to play for his local university, the University of Florida. In his three seasons with the Gators, the hometown kid made 101 appearances and had a 2.75 ERA.

Harrison is a sports coordinator at ESPN 98.1 FM/850 AM WRUF. He served as a beat writer for Florida Gators football for the 2019 and 2020 seasons. He also contributes to WRUF's Gainesville Sports Center segments and makes appearances on the Clash on Harp on Sports. Harrison has been a content writer for WRUF since January 2019 as well.
@HarrisonSmaj
Previous Gator Swimmers Continue to Pour on the Gold Medals
Next Cade Cunningham No. 1? Detroit Pistons Decide on Top Pick