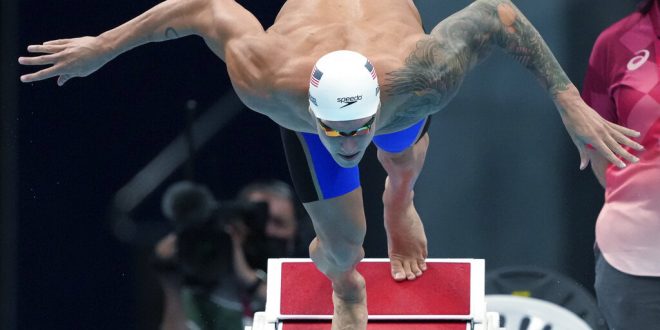 Caeleb Dressel of the United States starts in his heat of the men's 100-meter butterfly at the 2020 Summer Olympics, Thursday, July 29, 2021, in Tokyo, Japan. (AP Photo/Matthias Schrader)

Yesterday’s Olympic gold medals from Robert “Bobby” Finke and Caeleb Dressel added on two more medals to bring the Gators count to eight for the 2020 Tokyo Olympics, leading all collegiate programs. Swimming is responsible for 21 out of the United State’s 38 current medals.

With 25 meters to go in the 800 Meter freestyle, Bobby Finke found himself outside of the top three and looking in. His burst at the end pushed him past the German Wellbrock, Italian Paltrinier, and Ukrainian Romanchuk. Take a look at the closing seconds of the nail-biting race below.

The eight-time All-American swimmer’s one event at the 2020 Olympics was the 800 freestyle and he certainly made it count.

Fellow teammate Caeleb Dressel was even a little taken aback by the stunning finish.

Just one @FloridaGators swimmer supporting another!

Finke is an incoming senior at UF and has a lot to look forward to in his bright future.

Reaching the Olympic games would be a lifelong dream for many, let alone an Olympic gold medal. However, Dressel decided to go a step further and was crowned with another gold medal in the 100 freestyle last night.

“It means a lot. I knew the weight was on my shoulders – I’d won relay medals but never individual, so it was really special.”

Dressel checked off another box with a new Olympic record in the 100 freestyle. Finishing in 47.02 seconds, he broke France’s Alain Bernard’s 47.21 in the 2008 Beijing Olympics. When receiving the medal, Dressel got emotional when listening to the national anthem on the podium.

“I don’t know if it’s set in yet. It’s been a really tough year. It really came together so I’m happy.”

GOT IT DONE. OLYMPIC RECORD FOR CAELEB DRESSEL. #TokyoOlympics pic.twitter.com/0Kc9XolPLb

Dressel previously took home the gold in the 4×100 men’s freestyle relay giving him a pair of golds to take back home.

The United States currently leads all countries with 38 medals including 14 gold, 14 silver and 10 silver medals.