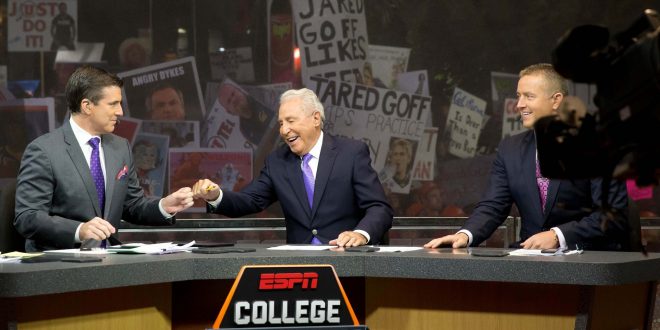 As reports came in about the SEC expanding its conference due to Oklahoma and Texas accepting invitations to join, ESPN’s Kirk Herbstreit wasn’t too fond of the move.

The “College Gameday” analyst shared his concerns on the current and future climate of college football.

“I just hate losing the tradition of this sport,” Herbstreit said, as the Big 12 loses two of its flagship programs, Oklahoma and Texas, to the SEC.

Kirk Herbstreit on Texas and Oklahoma joining the SEC: ‘I just hate losing the tradition of this sport’ https://t.co/CpPO2hGWmM pic.twitter.com/pimXdxNZIA

Herbstreit says with money being a heavy influence on the recent actions in college football, rivalries and traditions will be lost as this trend continues.

Last year ESPN and the SEC agreed upon a new television deal worth $300 million annually, and with Oklahoma and Texas joining the conference being one of highest grossing programs in revenue, that number is expected to increase with the deal not going into effect until 2024.

“Texas and OU, they’re looking over in the horizon to the east and they’re seeing that SEC and all that money, and they’re saying we can’t be left behind,” Herbstreit said in an appearance on SportsCenter. “We want to go into that neighborhood, and we want to join that group of teams, and that’s basically why we are where we are. I have literally no idea where we are headed, but I feel like these are two big dominoes that are falling.”

An exciting day for ESPN and the SEC. @LauraRutledge, @MariaTaylor and @KirkHerbstreit discuss the impact of this new agreement. pic.twitter.com/qTDexOYooC

What Happens to the Big 12?

The Big 12 now has two spots to fill as they search for other teams to join the conference after the departure of the two most popular and best known members.

It’s a consensus that the conference will “scramble and go grab Houston” said Herbstreit, who have been interested in joining the conference in the past or look for other teams to fill the void.

However, Herbstreit also wondered with the new development does it means that the Big 12 is headed on a path of no longer existing, as other programs may look to join other conferences like Big 10 or Pac 12.

And because of that Herbstreit said,college football will be controlled by four conferences that may have the ability to disassociate themselves from the NCAA creating their own rules and regulations.

Are we going to have four super conferences?” Herbstreit continued. “And are they going to pull away from the NCAA and form their own world of legislative body?”

On the flip side, in terms of just analyzing the SEC, rather than the nature of college football as a whole, Herbstreit is intrigued with the idea of Texas and Oklahoma competing with the conference’s best.