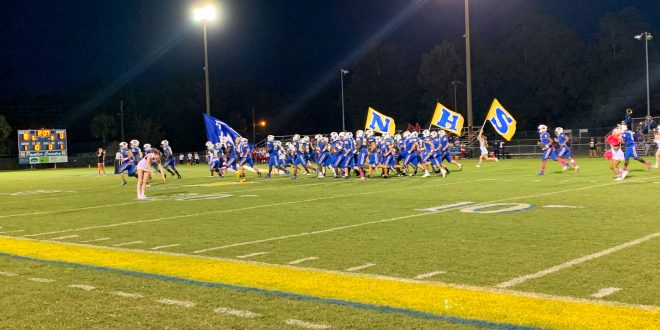 Newberry Panthers running onto the field prior to kickoff. Photo by Hannah White.

High School football is back this week, as Newberry take on Santa Fe High School on Friday, Aug. 27 at 7 p.m.  These two teams generally start the season off against each other but did not meet in 2020. Santa Fe comes in having won the last two head-to-head meetings after Newberry had won three straight prior to that, outscoring the Raiders 88-31 in those matchups.

Newberry comes into the season after winning eight of their 11 games in 2020 but lost 22 seniors from their team last year including their starting quarterback along with their three leading rushers and top-three receivers. However, they will have senior Riley Hester back after catching ten passes last season. Newberry is expecting many younger plays to get a chance to contribute this season.
Head coach Edward Johnson has been most happy with what he has seen with his offensive and defensive line. He feels that can definitely be a strength of his team early in the year.

For Santa Fe, the Raiders only won three games last season but are ready to bounce back in 2021 with many returning players. Landon Rogers, who threw for just under 1,000 yards at quarterback, will be back along with two of their running backs in Javarus Evans and Wil Hill, and three of their starting offensive linemen.
Also, head coach Jared Allen is thrilled to have their leading receiver back in Devan Mitchum. In 2020, he caught 28 passes for 218 yards and scored a touchdown. Santa Fe had a chance to play in the Kickoff Classic last week against Bradford High School and had over 1,200 fans in attendance along with over 300 students. Coach Allen is hoping to see the same support moving forward this year while remaining safe in the process.
Following this game, both teams will have nine more games with Fort White, P.K. Yonge, St. John Paul Academy II, and Eastside as common opponents this year.
Share