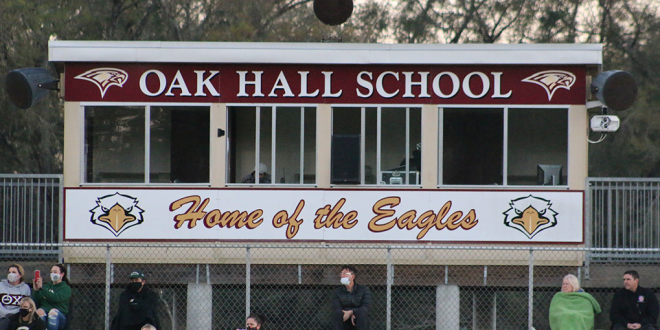 The COVID-19 pandemic has not been easy on any individual. But for the Oak Hall Football program and head coach RJ Fuhr, 2020 was an especially tough year.

Due to the pandemic, a mass amount of students from Oak Hall opted for remote learning in 2020. Correspondingly, with fewer students attending school, it became difficult for athletic programs to field a full roster. In lieu of these issues, the Eagles opted to play the 2020 football season 8 v. 8, fielding three fewer players than normal. However, Oak Hall’s surprising shift was met with great success. Overall, the Eagles went 9-1 on the season, losing to All Saints Academy 22-14 in the state championship.

Now, with students returning to the classroom, Fuhr’s team can once again field an 11 v. 11 roster.  He joined Steve Russell on “Sport Scene” Tuesday to discuss his team’s journey and return to ‘normal’ playing conditions.

With the change to 8 v. 8, Fuhr quickly realized he must change his offense. Normally operating in a spread offense, he weighed different options that would best fit the new format his team is playing under. While the triple option and wishbone offenses were considered, it eventually took consulting with his peers for the Eagles coach to pick an offense that would fuel a 9-1 run to the state championship.

Beginning in 2020, Oak Hall now practices a ‘Single-Wing Spin’ offense. Generally, this is a very run-heavy offense, incorporating play-action formations utilizing a ‘spin’ and ‘misdirection’ of the backfield. While only three weeks to learn the playbook, this offense yielded great results once players bought in. For instance, the Eagles’ second-leading receiver Andrew Pickens shifted to QB and led Oak Hall to a historic season. Pickens now plays receiver at Rhoades College. Fuhr discusses these results below.

Now with a return to 11 v. 11 play, Fuhr plans to continue the single wing. The offense showed early success in the Eagles’ first preseason game, with the first play being a 65-yard rush by team captain Carter Coleman.

A true leader and a great captain! Selfless leader who was asked to move to QB from receiver and ran our single wing offense flawlessly. Also played incredible at Free Safety and did a great job punting. Three sport athlete. Someone is gonna get themselves a great player and kid! https://t.co/klS8XXSCzb

With the season set to begin Friday, it will be interesting to see how Fuhr’s team can readjust to 11 v. 11. If there’s anything to take away from the Eagles’ bizarre 2020, winning is contagious. Oak Hall looks to continue this trend in 2021.

Sam Petosa is a Journalism major pursuing a Specialization in Sports and Media at UF. The South Florida native produces daily shows for WRUF, including "Sport Scene with Steve Russell, and "The Tailgate." In addition, Sam provides weekly sports updates for WUFT News and radio Sportscenter's for WRUF radio. Sam has been a writer at ESPN Gainesville since January 2020.
@sampetosa5
Previous ACC, Big 12, Pac-12 Join in Alliance
Next Scott Stricklin Talks Upcoming Football Season 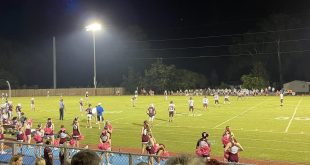